The rate of new pacemaker was 21.3%, which is akin to what has been reported in similar patient populations with both Evolut R and Sapien 3. 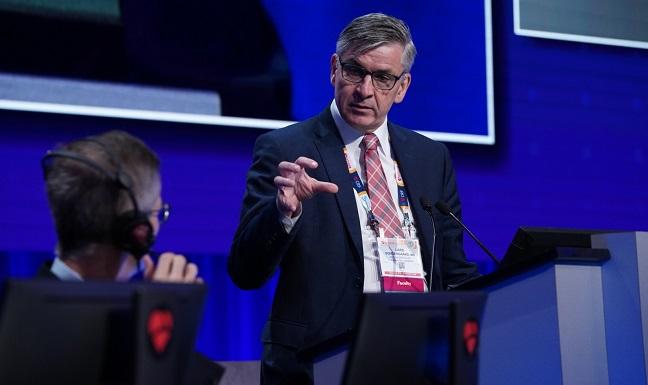 SAN DIEGO, CA—A study designed to look at early commercial experience with the Portico self-expanding transcatheter aortic valve outside the United States shows low rates of all-cause and cardiovascular mortality at 1 year, as well as a low risk of disabling stroke. While about one in five patients required a pacemaker, the investigators say that compares favorably with similar newer-generation valves when used in elderly populations at relatively high surgical risk.

The data confirm that the repositionable, self-expanding  Portico valve (Abbott), which comes in four sizes (23 mm, 25 mm, 27 mm, and 29 mm) is safe and efficient in a large real-world population, said Lars Søndergaard, MD (University of Copenhagen, Denmark), in a briefing with the media here prior to his presentation in the Late-Breaking Clinical Science session at TCT 2018. The study was simultaneously published in the Journal of the American College of Cardiology.

"It's a very flexible system, a very forgiving system if you have tortuous anatomy or horizontal aorta," he added.

The Portico valve holds CE Mark in Europe but is still being studied in a US pivotal IDE trial.

For PORTICO I, Søndergaard and colleagues included 941 patients from 61 sites across Europe, Canada, and Australia as part of a postmarketing study. All patients were at increased surgical risk as deemed by a heart team. The majority of the elderly patients enrolled in the study were female, and the cohort was at median to high surgical risk, with a mean STS score of 5.8. Two-thirds were NYHA functional class III or IV, and 85% met criteria for frailty.

Procedural success was 96% and conscious sedation was used in 75.5%. Approximately 90% of cases involved preprocedural balloon aortic valvuloplasty (pre-BAV), as recommended by the manufacturer, and 43% involved post-BAV.

Among the 717 patients with available 1-year follow-up data, all-cause mortality (the primary endpoint) was 12.1%. Cardiovascular death was 6.6%, and the stroke rate was 2.2%. The majority of strokes occurred in the first 30 days, with only 0.6% of all strokes occurring between 30 days and 1 year, Søndergaard noted during his presentation. MI occurred in 2.5%.

Hemodynamic performance was good, with mean aortic gradient decreasing from 50 mm Hg before the procedure to 8.7 mm Hg by 1 year. Effective orifice area, meanwhile, was a mean of 0.7 cm2 at baseline, increasing to 1.8 cm2 by 30 days and remaining durable out to 1 year (1.7 cm2).

Like the 30-day follow up, the 1-year results showed no cases of severe paravalvular leakage. However, paravalvular leaks were moderate in 2.6% of patients at 1 year, mild in 67.9%, and none or trace in 29.5%.

“After implant, there have been no reports of infective endocarditis, coronary occlusion, valve thrombosis, nor of structural valve failure that needed intervention through 1 year,” Søndergaard and colleagues note in their paper. In a multivariate analysis, preexisting kidney disease, heart failure, history of MI, mitral regurgitation, NYHA class IV, and length of hospitalization after the index procedure were all independent predictors of 1-year mortality.

Notably, the rate of new pacemaker at 1 year was 21.3%, up from 18.7% at 30 days. In his presentation, Sondergaard noted that the FORWARD study, which is investigating Evolut R (Medtronic), and also the Source 3 study, which is investigating the Sapien 3 (Edwards Lifesciences)—both new-generation TAVR devices—also had rates of new pacemaker that were fairly high at 22.1% with Evolut R and 15.3% with Sapien 3 in real-world populations similar to those of PORTICO. Still, he acknowledged that fewer new pacemakers is an important goal as newer devices roll out and become incorporated into practice.

“In the elderly population it's not uncommon to need a pacemaker, and we've come to accept that,” panelist Raj Makkar, MD (Cedars-Sinai Medical Center, Los Angeles, CA), said in an interview with TCTMD following the presentation. “But also what we know is that the pacemaker rates can be brought down by refining the procedure.”

Makkar added that as operators gain more experience with this and other new-generation valves, “you would expect the pacemaker rates to go down.”

‘Telestenting’ an Early-Days but Enticing Idea for PCI’s Future