The publication compares the first-generation mechanically expanded TAVR system to a first- and second-generation self-expanding device. 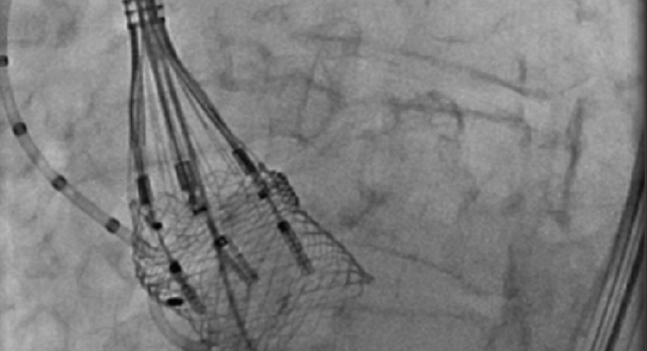 Included in the publication is a post hoc analysis many had been eager to get a peek at: namely, a comparison between Lotus-treated patients and the subset of patients who received the newer, repositionable Evolut R device.

As previously reported by TCTMD , the primary safety and efficacy results for REPRISE III were first unveiled at the EuroPCR 2017 meeting.

“Among high-risk patients with aortic stenosis, use of the [mechanically expanded valve] compared with use of the [self-expanding valve] did not result in inferior outcomes for the primary safety endpoint at 30 days or for the primary effectiveness endpoint at 1 year,” Ted Feldman, MD (Evanston Hospital, Evanston, IL), and colleagues write in their new paper. “These findings suggest that the [mechanically expanded valve] may be a useful addition for the treatment of high-risk patients with severe aortic stenosis undergoing TAVR.”

The final numbers in the JAMA paper differ slightly from those reported in May. In print, the rate of the primary composite safety endpoint, incorporating all-cause mortality, stroke, life-threatening/major bleeding, stage 2/3 acute kidney injury, and major vascular complications at 30 days among Lotus-treated patients was noninferior to that among CoreValve/Evolut R-treated patients (20.3% vs 17.2%; P = 0.003 for noninferiority). At 1 year, the mechanically expanded device was also noninferior to the first- and second-generation self-expanding devices for the primary effectiveness endpoint (death, disabling stroke, and moderate or greater paravalvular leak at 1 year), with rates of 15.4% and 25.5%, respectively (P < .001 for noninferiority). A superiority analysis for primary effectiveness was also statistically significant, Feldman et al note.

For the two most closely watched TAVR outcomes— paravalvular leaks and pacemaker implantations —the mechanically expanded device was associated with significantly lower rates of moderate or severe paravalvular leak (PVL; 0.9% vs 6.8%) but also with higher rates of new pacemaker implants (35.5% vs 19.6%, P < 0.001 for both). Of note, valve thrombosis also was more common with the Lotus device (1.5% vs 0%) but repeat procedures and valve-in-valve procedures were fewer.

One of the criticisms heard of REPRISE III at the time of its presentation last spring was that the mechanically expanded device was tested against a mix of first- and second-generation devices, the latter being a recapturable and repositionable device while the former is not. A key virtue of the Lotus is that it is fully retrievable and repositionable. At EuroPCR 2017, REPRISE investigators said they had not yet compared trial outcomes for Lotus versus Evolut R alone.

Speaking with TCTMD, Feldman highlighted that this post hoc analysis, which drew on a small sample size and was underpowered to show a statistical difference, is included in the published paper.

For the primary effectiveness endpoint, 20.3% of patients treated with Evolut R had an event (compared with 15.4% of Lotus-treated patients), “ suggesting that the [mechanically expanding valve] was still noninferior to the self-expanding valve despite the significantly reduced [self-expanding valve] sample size and correspondingly larger confidence interval for the difference in rates,” the researchers note.

The PVL rate among Evolut R patients, at 2.9%, was indeed lower than that seen in the combined self-expanding cohort and did not significantly differ from that seen in the mechanically expanded valve group. “I take from this that we all appreciated that the Evolut R is improved as compared with CoreValve and the hope that we all had for Evolut R to reduce PVL rates is being realized, and that Lotus remains unique in having very low PVL rates,” Feldman observed to TCTMD.

With regard to the high pacemaker rate seen with Lotus in REPRISE III, Feldman echoed what other observers have said, namely that the newer-generation Lotus Edge (Boston Scientific) is expected to reduce pacemaker implantation rates to the “low double digits.”

To TCTMD, Feldman stressed that REPRISE III was the first large, international trial to compare a new TAVR device with commercially available devices, something that may or may not happen in future trials. And the fact that a first-generation mechanically expanded device could compare favorably with more established devices suggests that the Lotus “deserves a fair place in the marketplace and the practice armamentarium,” Feldman said.

For that to happen, Boston Scientific will have to resolve issues with the device delivery system that precipitated a global recall in early 2017. The Lotus and Lotus Edge already hold CE Mark in Europe, and a US premarket approval (PMA) submission to the US Food and Drug Administration was anticipated for late 2017. Last month, however, Boston Scientific announced that tests of device and its delivery system have revealed further problems, prompting the company to delay plans to reintroduce the device in Europe and to postpone plans to initiate the US PMA.