SAN DIEGO, CA—TCT 2018 got underway this morning with what Roxana Mehran, MD, characterized as a “back to the future” feel: two back-to-back late-breaking trial sessions devoted to new stent technologies. TCTMD reporters will have full stories on each of the trials presented, but for a snapshot, read on. 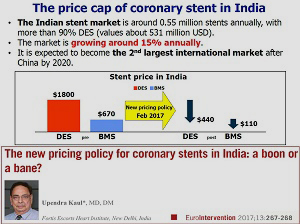 One last study in today’s late breakers stood out somewhat from the pack. The TALENT trial enrolled an all-comers population of 1,435 patients, randomized 1:1 to the Indian-made Supraflex sirolimus-eluting stent (SMT) or the Xience everolimus eluting stent (Abbott). The study is particularly significant, given India’s recent decision to cap the price of coronary stents at $440 US—a move that made safe, effective, and affordable stents an imperative. Many US and European stent-makers have now made the decision to stop selling certain devices in India rather than lower their price. India is also expected to be the second-largest market for these devices (after China) by 2020.

The Supraflex, Cohen continued, “looks very competitive and if it’s that cheap, I think people will want to use it. . . . Any $440 DES that works this well has got to be pretty useful.”

Sunil Rao, MD, likewise, also speaking during the press conference, predicted: “This is going to exert downward pressure on the price of stents.” 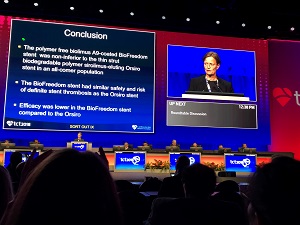 SORT OUT IX looked at a polymer-free coronary drug-eluting stent (BioFreedom) versus the Orsiro bioresorbable polymer-based drug-eluting stent in an all-comers patient population. As Lisette Okkels Jensen, MD, showed here, the BioFreedom stent in this trial was associated with higher rates of target lesion failure than the Orsiro (5.3% vs 4.0%) but met the criteria for noninferiority (P = 0.010). Safety was similar between devices, but target lesion revascularization rates were higher with BioFreedom (3.5% vs 1.3%, P < 0.001).

All of the different stent trials prompted a range of opinions and proposals during a morning press conference, where presenters and discussants pointed to the relatively similar results across trials with the different stents and asked what might be needed for one device to become a preferred choice in the cath lab, barring a major price differential. Antonio Colombo, MD, suggested that the primary endpoint for these sorts of head-to-head trials should perhaps be 2 or 3 years, not 12 months. With more follow-up, more palpable differences might emerge.

Pieter Stella, MD, suggested that noninferiority trials should be replaced by superiority trials, “Which of course would involve much more patients,” he said.

Patrick Serruys, MD, PhD, made a pitch for different primary endpoints, suggesting that now that target vessel failure rates have gotten so low that “maybe we have come to an end” with improving on those outcomes. “We should maybe reconcentrate on angina pectoris,” he said.

Sunil Rao, MD, meanwhile, pointed to the low rates of ischemic events seen with the thin-strut, drug-eluting stents and suggested that while high-bleeding-risk patients have typically been the target of trials testing short DAPT in combination with drug-coated/polymer-free devices, it may be time for similar trials in the latest-generation drug-eluting stents. 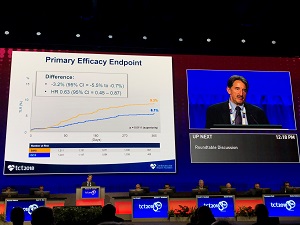 LEADERS-FREE II also took on the question of what stent is safest and most effective in patients at very high bleeding risk—this time with the aim of getting a device registration decision for the Biolimus A9 BioFreedom stent (Biosensors) in the United States. Here, investigators led by Mitchell Krucoff piggybacked off of the original LEADERS FREE trial for the comparator arm from this study: 1,189 patients at high risk of bleeding treated with a BMS (Gazelle; Biosensors) compared with 1,148 US patients treated with the Biolimus A9. According to Krucoff, the trial met superiority criteria for both its primary safety endpoint of cardiac death/MI (8.6% vs 12.3%; P = 0.0025 for superiority) and its primary efficacy endpoint of TLR at 1 year (6.1% vs 9.3%; P = 0.0111 for superiority).

IMPERIAL was a stand-out in today’s session, being the only trial look at drug-eluting stents in femoropopliteal arteries and as presenter William Gray, MD, put it, “the first-ever DES versus DES in the peripheral artery.” 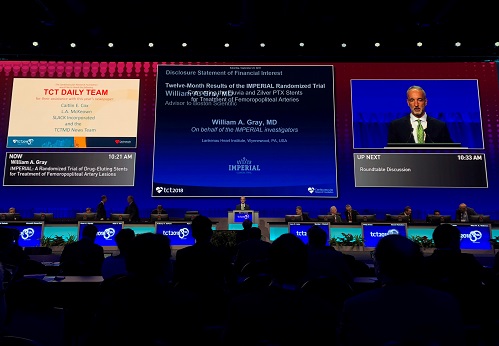 IMPERIAL compared the investigational Eluvia, permanent-polymer DES (Boston Scientific) and the market-approved, polymer-free Zilver PTX (Cook Medical), with the former implanted in 309 patients and the latter in 156 patients. At 12 months, primary patency assessed by duplex ultrasound was 86.8% with Eluvia and 77.5% with Zilver PTX, a difference that met criteria for noninferiority (the primary endpoint) and for superiority—the latter being a prespecified, post hoc analysis, Gray reported here. The primary safety endpoint was major adverse events (all-cause death through 1 month and target limb major amputation and TLR through 1 year), and Eluvia was shown to be noninferior to Zilver PTX (4.9% vs 9.0%). There were numerically—but nonsignificantly—lower rates of TLR (4.5% vs 9.0%; P = 0.0672) and stent thrombosis (1.7% vs 4.0%; P = 0.1956) in the Eluvia arm.

Both stents boosted symptomatic, functional, and hemodynamic outcomes through 1 year.

“Here’s the data we’ve all been asking for, a head-to-head trial,” Gray told TCTMD. “The trial showed superiority of one device over another. It now brings into play a significant and strong competitor in the marketplace for antiproliferative therapy in SFA [superficial femoral artery] intervention and lines up nicely with the current choices of DCB [drug-coated balloon] and Zilver DES. That is, I think it’s favorably compared to those other therapies.”

Head-to-Head in the Coronaries

A range of other studies compared newer thin-strut stents with either no polymers or bioresorbable polymers to market-tested stents. Of note, these various trials are helping to tweak the lingo. The term “drug-eluting stents” is now being used to refer to polymer-based devices, while “drug-coated” (which I remember being used somewhat interchangeably with “eluted” in the past) is being exclusively used for the polymer free stents that also deliver some kind of antiproliferative drug from the abluminal layer of the stent, without a polymer. 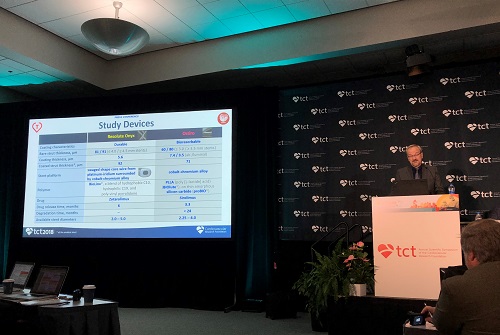 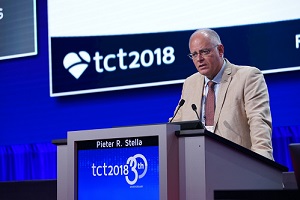 ReCre8 was a non-industry sponsored, all-comers trial that randomized 1,532 European patients to PCI with a polymer-free amphilimus-eluting stent or a permanent polymer zotarolimus-eluting stent (Resolute Integrity; Medtronic). Troponin-negative patients received 1 month of dual antiplatelet therapy (DAPT), while troponin-positive patients were put on DAPT for 12 months. As Pieter Stella, MD, PhD, showed here, the trial met its noninferiority endpoint for target lesion failure at 12 months (6.2% vs 5.6%; P = 0.0086 for noninferiority). Also, the ReCre8 stent was associated with a similar rate of net adverse clinical events at 12 months compared with the permanent-polymer stent (12.2% vs 11.6%), and these results were maintained throughout multiple subgroups.