This morning’s late breaker offered longer-term follow-up for several of the big-name trials from prior years.

SAN FRANCISCO, CA—The theme of the third day of late-breaking trials could be termed “throwback Saturday,” featuring longer-term results from some of the biggest trials of prior meetings.

Michael Mack, MD (Baylor Scott and White Heart Hospital, Plano, TX), took the stage first, presenting 3-year outcomes from the darling of last year’s TCT conference: COAPT. Adding an additional year of follow-up is particularly intriguing for this trial, since it captures the time in which patients initially randomized to guideline-directed medical therapy (GDMT) were allowed to cross over to the MitraClip after the 2-year follow-up.

3-year results of #COAPT: despite 18.6% crossover to MitraClip in OMT, MitraClip results still hold (and even increase) at 3-year follow-up. #TCT2019 pic.twitter.com/2ghEutL2oD

Not surprisingly, perhaps, the Kaplan-Meier curves for the primary endpoint of death/heart failure hospitalizations for the intention-to-treat groups continued to separate at 3 years, reaching 88% for the GDMT group and 58.8% in the MitraClip group. More striking, perhaps, was an analysis that zoomed in on the total of 58 patients who crossed over to MitraClip either before 24 months (five patients) or after 24 months (53 patients). Among these patients, 12-month rates of the primary endpoint were just 28%, nearly matching the rate seen among the group originally treated with the MitraClip at 1 year.

“GDMT-only patients who crossed over and received a MitraClip experienced fewer HF hospitalizations and deaths or heart failure hospitalizations within 12 months than those who did not cross over, with rates comparable to patients originally assigned to the MitraClip,” Mack said here.

Incredible 3 yr data from the COAPT trial. MitraClip continues to reduce rate of HF hospitalization and improve survival. But as @NirUrielMD points out, mortality rate is still high and we need to identify these at risk pts much earlier in the course of their disease. #TCT2019 pic.twitter.com/UVUY80JATh

PARTNER 2A at 5 Years 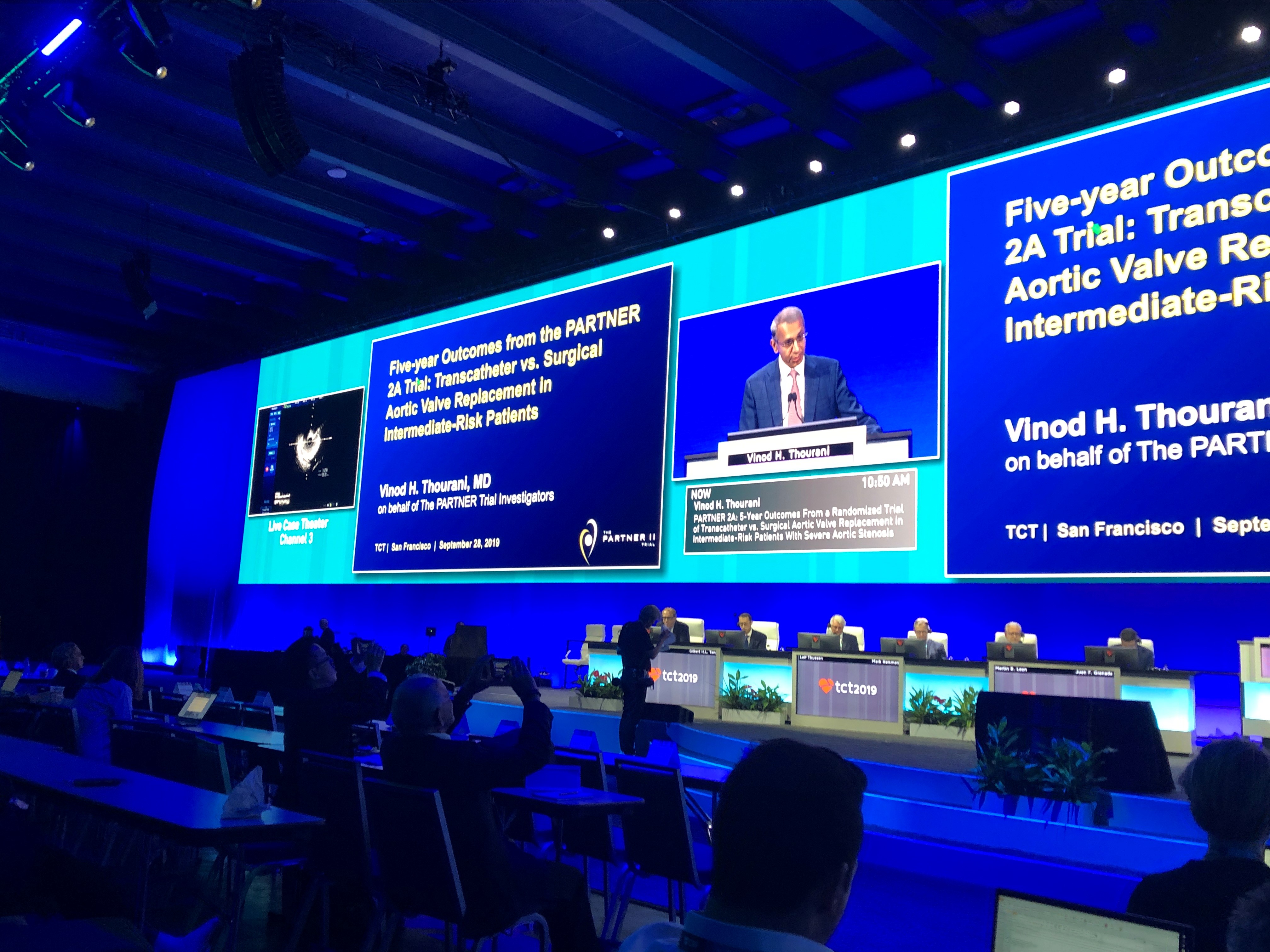 Next up, Vinod Thourani, MD (MedStar Heart and Vascular Institute, Washington, DC), presented 5-year results from PARTNER 2A, which he reminded journalists was the largest, randomized trial ever done in the field of TAVR and SAVR—this one focused on patients with aortic stenosis at intermediate surgical risk.

The trial, showing no differences in death or disabling stroke at 2 years, paved the way for an intermediate-risk indication for the balloon-expandable devices studied in this trial. At 5-years, investigators still saw similar rates of death and disabling stroke between groups at 47.9% for TAVR versus 43.4% for SAVR (HR 1.09; 95% CI 0.95-1.25). Of note, though, extending findings from the earlier study, patients who had undergone TAVR with a transthoracic approach appeared to have worse outcomes than SAVR (59.3% vs 48.3%; HR 1.32; 95% CI 1.02-1.71). 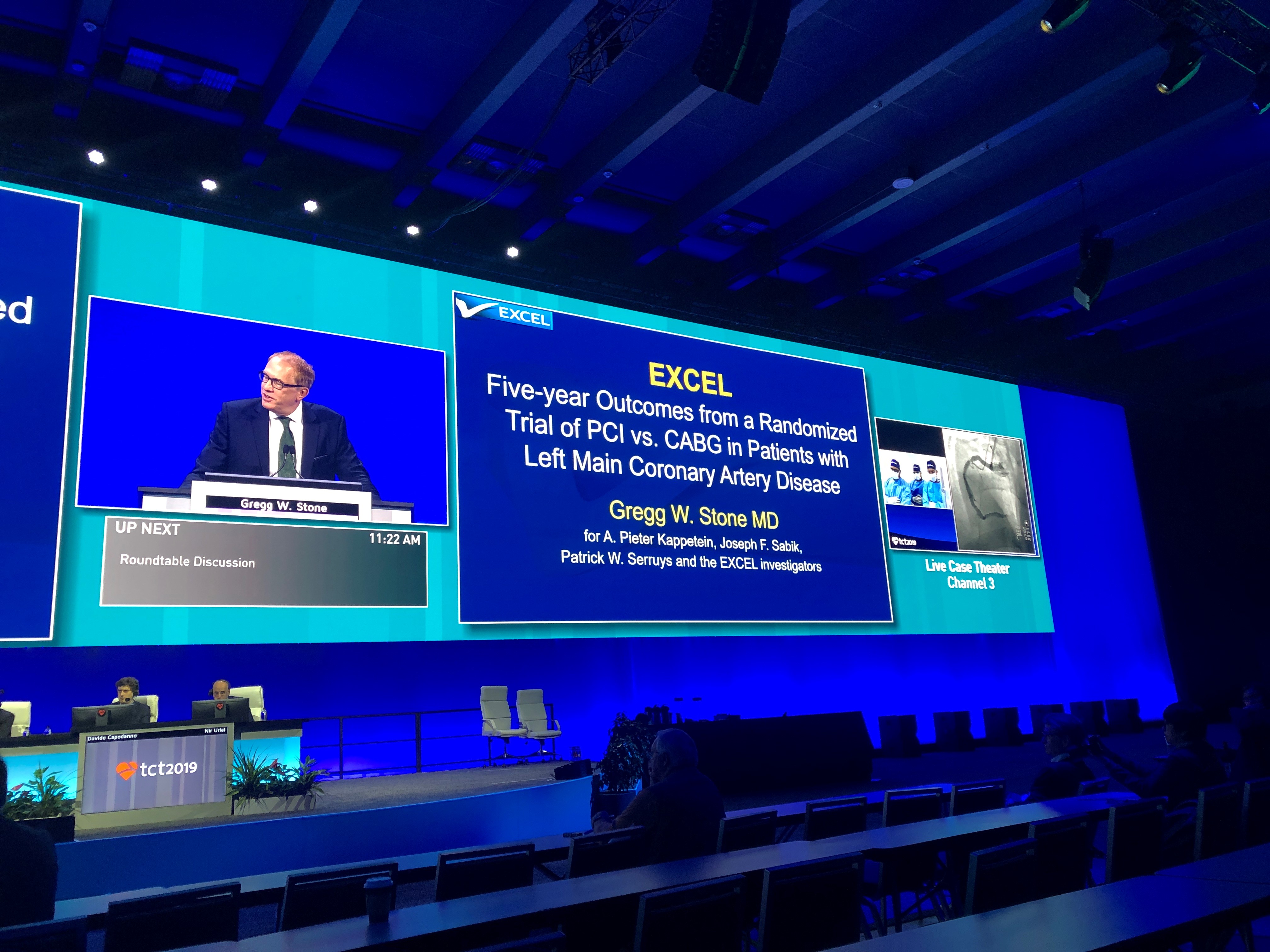 The third and final trial in the morning session was EXCEL, back after a 3-year hiatus, this time with 5-year outcomes. Here, Gregg W. Stone, MD (Icahn School of Medicine at Mount Sinai, New York, NY), showed that at 5 years PCI was noninferior to CABG for patients with left main CAD for a primary composite outcome of all-cause death, stroke, or MI, with rates of 22% in PCI patients and in 19.2% of CABG patients. Looking at the timeline of events, Stone showed that in the first month, the numbers favored PCI, with 8% of CABG patients experiencing the primary endpoint versus 4.9% of PCI-treated patients. From 30 days to 1 year, however, outcomes were similar between groups (4.1% for PCI and 3.8% for CABG). Between 1 and 5 years, PCI patients experienced more events than their CABG counterparts (15.1% and 9.7% respectively).

“The early benefits of PCI due to reduced periprocedural risk were attenuated by the greater number of events occurring during follow-up with CABG, such that at 5 years the cumulative mean time free from adverse events was similar with both treatments,” Stone concluded. He and his co-investigators conclude in the published paper that a 10-year or longer follow-up would be best to “characterize the very late safety profiles of PCI and CABG, since both stents and bypass grafts fail progressively over time”

Unfortunately, Stone said in a morning press conference, the trial funder has declined to pay for continued follow-up.

CABG hazard early, PCI hazard late over 5 day difference in event from survival on EXCEL at 5 yrs pci vs cabg for left main #TCT2019 - need to read this paper for all details pic.twitter.com/TMFDee4eTS 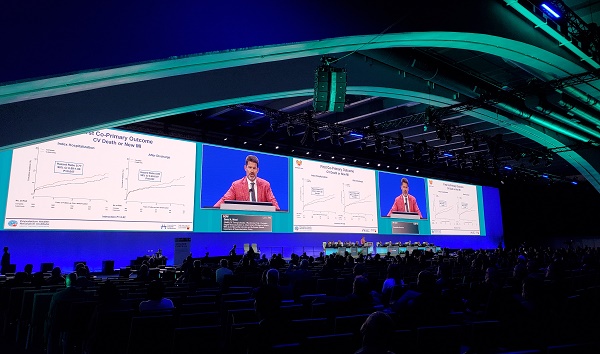 The second wave of late-breakers opened with a new analysis from COMPLETE. As some will recall, the main COMPLETE results were presented a few weeks ago at the European Society of Cardiology Congress 2019. Today, the trial was back on the main stage, now with a closer look at the timing of complete revascularization in patients with STEMI and multivessel disease. As presenter David Wood, MD (Vancouver General Hospital, Canada), showed here, the benefits of complete revascularization, rather than a fix for the culprit lesion alone, are observed regardless of whether the additional procedure is done during the index hospitalization or sometime in the several weeks after discharge.

Rounding out the rest of this session are 3-year results from EuroCTO, looking at clinical outcomes, MODERATO II, an early glimpse at cardiac neuromodulation therapy in patients with hypertension, and 5-year results from LEVANT, combining three randomized trials of percutaneous angioplasty with versus without a drug-coated balloon in patients with femoropopliteal arterial disease. This last is of particular interest to anyone paying attention to the controversy in this space.

Earlier today, we ran a story covering some of the discussion around this "spooky signal." Now, in these late breakers, we have a new look at patient-level data from the LEVANT trial series of a paclitaxel-coated balloon for the treatment of PAD. As Kenneth Ouriel, MD (Syntactx LLC, New York, NY) showed here, these numbers suggest no differences in mortality compared with patients treated with a plain balloon. While the trial was not powered for mortality, the analysis is part of efforts by researchers to dig deeper into the existing data sets to try to understand a persistent signal of mortality that has been a source of consternation in the endovascular community for nearly a year.

As part of the patient-level analysis, the LEVANT investigators incorporated a committee of vascular surgeons, interventional radiologists, and oncologists to readjudicate the deaths from LEVANT 1 and LEVANT 2. Although there was a numerically higher number of deaths at 5 years in LEVANT 2 in the paclitaxel arm compared with the uncoated balloon, the difference was not statistically significant and none of the deaths were adjudicated as related to paclitaxel.

Moreover, Ouriel and colleagues also found no dose-response relationships or clustering of deaths in any category, which they say argues against a relationship between paclitaxel use in the peripherals and increased risk of death.

“If you have a drug that causes death, it should cause death through one mechanism and you would see more MIs maybe, or more pneumonia; it should be one thing. There was no one thing,” Ouriel told TCTMD. “Yes, mortality was higher numerically, but it wasn't from any one type of cause of death.”

Our full story on LEVANT can be found here.