Earlier results from the trial were also neutral, raising hopes that a decade of data would be the charm. Despite these findings, some see signs. 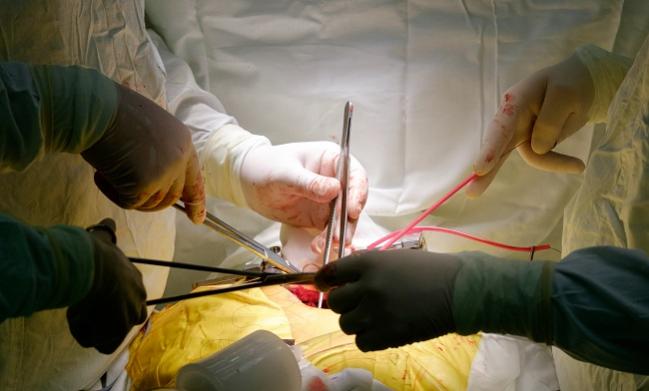 MUNICH, Germany (UPDATED)—Surgeons expecting to see a win for bilateral internal-thoracic artery (ITA) grafts at the 10-year mark in the Arterial Revascularization Trial (ART) will be disappointed today.

A decade’s worth of follow-up from the long-running study showed no difference between patients randomized to CABG surgery involving two ITA grafts instead of a single arterial graft, plus vein or radial artery grafts, for a composite primary endpoint of death, MI, or stroke. There also was no mortality in the intention-to-treat population.

Had everyone had the same degree of proficiency, the results may have been different, Taggart told a morning press conference. “I would propose to you that if everyone could have done the [operation] to the same extent, with few crossovers, I think we would have had a very positive result in this trial in the intention-to-treat analysis,” he said.

The classic CABG approach typically entails a left internal-thoracic (mammary) artery to the left anterior descending artery, with saphenous-vein or radial-artery grafts used to bypass other vessels. ART was launched to compare outcomes when a bilateral mammary-artery approach was used—arterial grafts are typically superior to vein grafts—as compared with use of a single internal-mammary artery plus vein or radial grafts.

As previously reported by TCTMD, both 1-year and 5-year results from ART showed no differences in mortality or the composite of death, MI, or stroke among 3,102 patients from seven countries who were randomized to single or bilateral grafting between 2004 and 2007. There were also no differences in major bleeding or repeat revascularization, although patients randomized to bilateral grafting experienced more sternal wound complications and reconstruction.

At the time the 5-year results were released at the American Heart Association 2016 Scientific Sessions, several surgeons who spoke with TCTMD said that they would expect a benefit of bilateral mammary-artery grafts to emerge as superior at the 10-year mark. Alas, no such benefit emerged.

Use of guideline-based medical therapy was also extremely high, ranging from 73% to 89% for aspirin, statins, ACE inhibitors, beta-blockers, or angiotensin receptor blockers. These rates are “much higher than seen in other contemporary PCI versus CABG trials,” Taggart noted.

For the primary endpoint, a composite of death, MI, and stroke, there were no differences between the single ITA and bilateral ITA groups at 10 years (HR 0.90; 95% CI 0.78-1.03). Nor was there any difference in 10-year survival, where the event curves were nearly superimposed throughout the follow-up period.

There are a number of possible explanations for the finding, Taggart said, including the possibility that there is genuinely no difference between bilateral versus single ITA grafting—an option he outright dismissed. More plausible reasons, he continued, include the high rate of guideline-based medical therapy, use of radial artery grafts, which were used for additional grafts in 22% of patients in the single ITA group. As noted, the differential crossover rate also likely played a role.

Those crossovers speak to the degree of surgeon comfort with the bilateral procedure. In an analysis comparing physicians who had did fewer than 50 bilateral ITA procedures with those who did 50 or more, the patients of surgeons doing the higher number of surgeries had significantly higher survival and significantly lower rates of the composite primary endpoint.

Moreover, in an analysis looking at 10-year mortality among the highest volume surgeons, deaths were significantly higher at 10 years for patients who got a single ITA as compared with those who received bilateral ITA. A close look at the survival curves, however, hints at the technical hurdles posed by this procedure, since survival was initially lower with the single ITA approach. But the curves crossed before the 2-year mark to favor the bilateral strategy, suggesting that as surgeons grew more comfortable with the procedure, outcomes improved.

Ultimately, Taggart said, surgeons will likely interpret the ART results according to their already entrenched beliefs. “Surgeons who are experienced in doing arterial grafts will continue to do them, because they will point to a large amount of observational data plus very strong angiographic evidence of their superior patency. [They] are not going to say okay, let’s go back to using vein grafts,” he told TCTMD. “On the other hand, surgeons who don’t want to use arteries will look at the intention-to-treat analysis and say there’s no benefit. Surgeons who can do the operation will look at the as-treated analysis and say they knew this all along.”

To be included in the trial surgeons were to have done at least 50 bilateral ITA procedures previously, but that may not have been true for all, Taggart said. “We have to live in the real world of what we set off to do and what we actually observed, and one of the major lessons from this trial was the number of surgeons who weren’t experienced enough to do this operation properly.

“You often hear that surgeons exaggerate about things,” he quipped, “although not as much as interventional cardiologists.”

Commenting on the findings during the press conference, Steen Dalby Kristensen, MD, DMSc (Cardiovascular Research Centre, Aarhus University, Skejby, Denmark), said that if he himself was undergoing CABG, he’d leave the decision of which grafts to use to an experienced surgeon. “I might have one question, however, because some of our surgeons think this procedure carries a high risk of infection,” he added.

In response, Taggard acknowledged: “I’m a keen proponent of using bilateral ITAs, but you should avoid using it in patients who are severely obese, or those who have diabetes or have bad lungs. In these situations, patients with these conditions certainly have a higher risk of sternal wound infection.”

In the years since ART was launched, radial grafts have emerged as superior to saphenous veins but are easier to harvest than mammary arteries, Taggart said. “We are making a plea to cardiologists that if they are doing their investigations, they should use the right radial and leave the left for the surgeons.”

Commenting on the study for TCTMD, John Warner, MD (UT Southwestern, Dallas, TX), agreed that “the crossovers are going to make the trial difficult to interpret, such that the benefits are not as great as one might have hypothesized years ago.”

That said, Warner pointed out that surgeons have to “make decisions on the fly” and that might mean electing to use a procedure that, for better or for worse, they felt was better suited to the patient than the strategy to which that patient was randomized. “One way to interpret this trial is that it is negative, and the findings diluted,” he said. “On the other hand, if you are hoping that people are matching patients to procedures, that suggests a positive trial.”