‘Twas the Night Before Christmas: Holidays Linked to Higher Risk of Acute MI

The increased risk over Christmas may be attributed to emotional distress and/or excessive food and drink, say researchers. 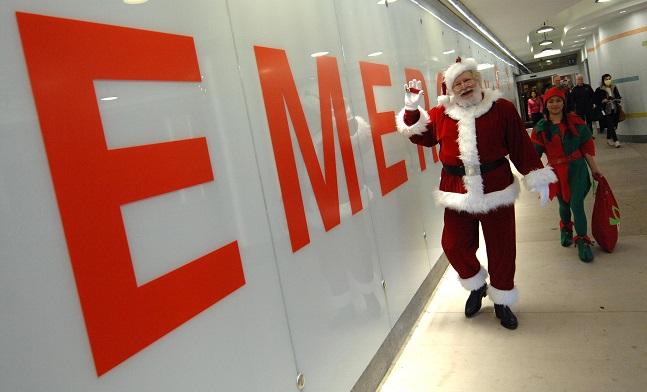 Seasonal variations in the risk of cardiovascular events make this time of year one of the riskiest for Swedes, according to investigators who found that Christmas Eve, Christmas Day, and New Year’s Day are all associated with a higher incidence of acute myocardial infarction in Sweden.

“We do not know for sure, but many mechanisms may be involved, of which emotional distress with acute experiences of anger, anxiety, sadness, grief, and stress increase the risk of myocardial infarction,” senior investigator David Erlinge, MD, PhD (Lund University, Sweden), told TCTMD in an email. “Excessive food intake, alcohol, and long-distance travelling may also increase the risk of heart attack.”

Individuals older than 75 years and those with diabetes or a history of coronary artery disease were the most vulnerable on Christmas, he said.

Additionally, Erlinge noted that the pattern of increased risk in the morning, evident throughout the year, is reversed at Christmas. The risk of acute MI is highest in the evening and peaks around 10 PM, suggesting that “the stress and eating during the day triggered the heart attacks,” he said. On New Year’s, the higher risk was observed during the daytime, rather than the evening, and could be caused by “sleep deprivation, exposure to cold in the middle of the night, and late-night eating and drinking,” said Erlinge.

The researchers, including lead investigator Moman Mohammad, MD (Lund University), point out that cardiac mortality and hospital admissions due to MI have been previously shown to peak at the Christmas and New Year’s holidays. Additionally, the risk of MI has also been linked to football championships, hurricanes, and stock market crashes.

The new study, which was published earlier this month in the BMJ, is an analysis of 283,014 cases of acute MI reported in the SWEDEHEART registry between 1998 and 2013. Overall, the risk of acute MI was 29% higher on December 25th, 21% higher on December 26th, and 20% higher on New Year’s Day when compared with 2 weeks prior (the period that served as the control). New Year’s Eve, on the other hand, was not associated with an increased risk. Similarly, there was no observed risk of acute MI around the Easter holidays or sporting events, such as European and World Cups (soccer) or Olympic Games.

The midsummer holiday, however, was associated with an increase in acute MI. This seasonal break is quite popular in Sweden, say investigators. It immediately precedes the summer solstice and involves “dancing around a maypole, singing, eating, and drinking, often to excess,” they note. During this time, there was a 12% increased risk of acute MI. Throughout the year, Mondays were associated with a significantly increased risk of events, while the risk of acute MI was highest in the early morning, peaking around 8 AM.

As for the seasonal message, Erlinge said that people need to be aware of the increased cardiovascular risk associated with the emotional distress and/or celebrations involving excessive food and alcohol intake that may occur during big holidays. “We also need to care more about our elderly and sicker friends and relatives,” he said.

Need to Spin a Negative Trial? Consult the Playbook

Weekend Discharge Not Linked to More Readmissions After Cardiac Surgery

Oktoberfest Revelers Show That Drinking Alcohol Gets the Heart Racing