The CC-ABC approach can be viewed as both a to-do list and a communication tool between specialists, one expert explained. 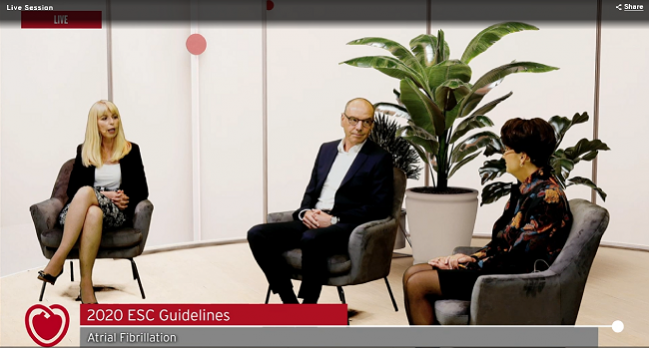 New European guidelines for the diagnosis and management of atrial fibrillation, released yesterday, incorporate a range of findings from recent clinical trials but also represent a “paradigm shift” in terms of how physicians across specialties should, after first confirming the diagnosis, classify and manage these arrhythmias.

The 2020 guidelines, last updated in 2016, were jointly developed by the European Society of Cardiology (ESC) and the European Association for Cardio-Thoracic Surgery and released on the opening day of the ESC’s virtual congress.

“What we did was to emphasize that in order to start managing atrial fibrillation you first need to document it, so we have promoted ECG documentation of atrial fibrillation into the recommendations,” Tatjana Potpara, MD, PhD (University of Belgrade, Serbia), told TCTMD. Potpara co-chaired the guideline-writing group and also chaired the ESC session unveiling the document. “That may look like common knowledge, but management of AF implies serious treatment decisions and comprehensive treatment, so in order to start that you need to document that it is really atrial fibrillation.”

Once A-fib is confirmed on ECG, she continued, the next step is to characterize it. Standard practice has been to use single ”domains” for disease characterization based on temporal patterns: paroxysmal, persistent, permanent, or new onset, but “there are limitations increasingly acknowledged” to using these categories, Potpara said. In many instances, such classifications are not linked to a specific treatment course; there’s also the difficulty of discerning between different A-fib categories.

Instead, the guideline committee proposes the adoption of a new, more-comprehensive approach incorporating four domains, which they’ve dubbed “4S-AF,” the four being: stroke risk, symptom severity, severity of A-fib burden, and substrate severity. “The beauty of that approach is that at present we are using available tools to characterize each of the domains, but with the 4S-AF scheme, can embrace new scores or new tools that will be available in the future for description or evaluation or assessment of each of the domains,” she said.

Stroke risk and symptom severity can be assessed using standard tools, such as the CHA2DS2-VASc and EHRA scores, respectively. Severity of A-fib burden can be ascertained using duration, spontaneous termination, etc, while substrate severity entails the consideration of factors like age, comorbidities, and atrial enlargement/fibrosis, the guidelines explain.

“The purpose of such an approach would be to streamline communication among physicians of different specialties and across all healthcare levels,” Potpara said. “You can view it as a kind of international language between specialties.”

Also proposed in the guidelines, following confirmation and characterization (CC), are the ABCs of management, which Potpara characterized as an “integrated, holistic pathway.”

The A, she explained, “stands for avoid stroke, essentially using anticoagulation therapy, B for better symptom management using either rate or rhythm control or both, and C—a very important component—for cardiovascular risk factor and comorbidity management, because appropriate, timely, and high-quality management of cardiovascular risk factors and concomitant comorbidities has important implications for total AF burden, symptoms, quality of life, and patient outcomes.”

This diagnosis/classification/management pathway—termed “CC-ABC” in its entirety—also aims to involve patients, calling for shared, informed decision-making about treatments, with patient-reported outcomes being a cornerstone of treatment, she said.

In terms of key changes incorporating new evidence, Potpara highlighted the shift towards catheter ablation as a class I indication, up from IIa, in certain patients who’ve failed medical therapy, and as a first-line therapy in patients with left ventricular function “when tachycardia-induced cardiomyopathy is highly probable, independent of their symptom status.” The CABANA trial results get a nod. As the writers note, though, the trial established symptom improvement with catheter ablation, but no significant reductions in the primary composite outcome of death, disabling stroke, serious bleeding, or cardiac arrest as compared with medical therapy.

Recommendations for non-vitamin K antagonist oral anticoagulants (NOACs) in a range of settings are strengthened, getting a class I indication in certain peri-cardioversion and peri-catheter ablation settings. Potpara also highlighted changes supporting the use of NOACs in various coronary artery disease settings, reflecting the positive results of AUGUSTUS, PIONEER-AF, ENTRUST-AF, and RE-DUAL.

“More-specific recommendations have been made in comparison to 2016, because now we have evidence that using a very short course of aspirin in combination with a P2Y12 inhibitor and oral anticoagulant is safe and likely is not associated with an increased risk of ischemic events in most patients,” Potpara said.

Lastly, noting that it “might seem small,” Potpara highlighted a change in the recommended use of oral anticoagulation following elective cardioversion. While a 4-week course remains the standard, it can now be considered “optional” in patients with a CHA2DS2-VASc of 0 for men or 1 for women whose atrial fibrillation onset was less than 24 hours. There’s no randomized trial data to support this, she warned, but an increasing body of observational evidence supports the notion that postcardioversion anticoagulation may safely be skipped in this select patient group.

Trimetazidine Safe but Not Protective Long-term After PCI

Guidelines and Expert Consensus on Anticoagulation in the Atrial Fibrillation Patient With ACS or PCI: How Strong Is the Evidence?