A Visit With a Cardiologist May Improve A-fib Outcomes

More research is needed to know why the care a cardiologist provides may cut the risk of death, one expert says. 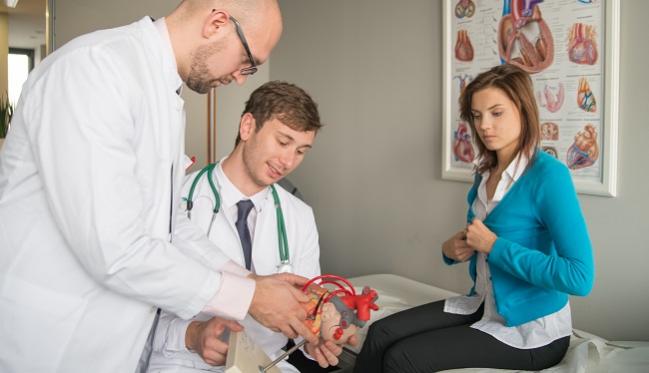 Patients with new-onset A-fib who see a cardiologist within the first year have a lower risk of dying than those don’t receive specialty care, a Canadian study shows.

After propensity-score matching, the rate of all-cause death in the first year after the index hospitalization was 5.3% among those seen by a cardiologist and 7.7% among those who were not (HR 0.68; 95% CI 0.55-0.84), investigators led by Sheldon Singh, MD (Sunnybrook Health Sciences Center, Toronto, Canada), report in a study published in the December 2017 issue of the Canadian Journal of Cardiology.

That finding is consistent—albeit larger in magnitude—with the results of the TREAT-AF study published in June, Singh told TCTMD.

“Our work has confirmed their work in a slightly different population and adds to the importance of care by cardiovascular specialists looking after patients with atrial fibrillation, as some of these processes of care that cardiologists provide may result in improved survival for these patients,” he said.

But according to William Whang, MD (Mount Sinai Hospital, New York, NY), who was not involved in either the current study or TREAT-AF, the finding of a lower mortality risk in patients treated by cardiologists cannot be taken at face value, because it has not been proven in a randomized trial.

When atrial fibrillation is the focus of a visit it may lead to a more comprehensive evaluation of other underlying causes. William Whang

He told TCTMD that he’s not sure such a trial can be done, but noted that the recently reported IMPACT-AF trial showed that an education and feedback intervention boosted use of oral anticoagulation in patients with A-fib and also may have lowered the rate of stroke. This “suggests that there are particular components of care that may be especially helpful to emphasize in A-fib patients,” Whang said.

Because it’s not realistic for every patient with A-fib to be seen by a cardiologist, he added, “to me, [the study] calls for more investigation about what it is about the care that a cardiologist provides that may benefit the patients more.” He speculated that cardiologists may be placing a greater emphasis on oral anticoagulation or may be better at uncovering related conditions.

“When atrial fibrillation is the focus of a visit it may lead to a more comprehensive evaluation of other underlying causes,” Whang said.

Homing in on Processes of Care

Singh noted that most studies evaluating strategies to improve survival in patients with A-fib have focused on drugs or catheter ablation, with few addressing processes of care.

To help fill that gap, he and his colleagues examined administrative data on residents of Ontario, Canada, ages 20 to 80 years who presented to any emergency department in the province with new-onset A-fib between 2010 and 2012. Of 22,032 patients included in the analysis, 85% had a cardiology visit in the year following the index hospitalization; the mean time to the first such visit was 37 days. Propensity-score matching produced 2,902 patient pairs.

Whang said it was “a little curious” that the rates of stroke and mortality would go in different directions, suggesting that there could be underlying differences between the two groups despite careful statistical adjustment. He called for more research to address the discrepancy.

“We wonder whether or not that longer time in hospital or higher-intensity resources used may have resulted in improvement in survival,” Singh said.

The investigators also looked at processes of care, finding that use of echocardiography, stress testing, coronary angiography, revascularization, and hemoglobin A1c measurement were greater in patients who saw a cardiologist. Those patients were more likely to use oral anticoagulation as well.

We should seek to promote collaborative, patient-centered models of care delivery that work within local contexts and preserve the vital role of primary care providers. Stephen Wilton

The message should not be that all patients with new-onset A-fib need to see a cardiologist, Singh said, acknowledging that it might not be possible in some areas and that there might be specific reasons certain patients aren’t receiving cardiology care that are themselves associated with a heightened mortality risk.

“This work and the work from TREAT-AF are important because now there’s a therapy associated with improved survival in AF patients, and given the large number of patients, we need to understand what are the processes of care that cardiologists provide these patients that may mediate survival,” Singh said. “Because it may be that it’s not so much the cardiologist but a certain test or follow-up on certain testing or drug therapy that if we can understand that and clearly communicate that then it could be provided by primary care physicians looking after patients.”

Specialty cardiology care is probably not warranted for all patients with A-fib, Stephen Wilton, MD (University of Calgary, Canada), agrees in an accompanying editorial.

“Current Canadian and international clinical guideline documents for management of AF express no preference for specialist versus primary care delivery for patients with AF. The results of this study will not shift these recommendations, and in my opinion that is just fine,” he writes.

He advocates for empowering family physicians to perform the initial work-up of patients with A-fib, especially those who are asymptomatic, and to initiate stroke prevention therapies.

“Instead of mandating that all patients with AF see a cardiologist, we should seek to promote collaborative, patient-centered models of care delivery that work within local contexts and preserve the vital role of primary care providers,” Wilton concludes.

Trajectory Unknown: How ORBITA Lands in Clinical Practice Still Up for Debate