An AVIATOR 2 investigator calls for novel risk assessment tools in this complex patient cohort beyond what already exist for A-fib. 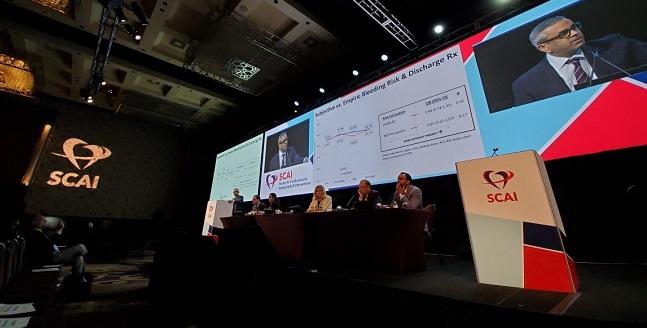 LAS VEGAS, NV—The choice of antithrombotic for patients with A-fib following PCI is highly variable, although adherence to oral anticoagulants is greater over time as compared with antiplatelet drugs, according to 1-year results from the AVIATOR 2 registry. Also, despite subjective and empiric bleeding and ischemic risk assessment, 1-year event rates of each hover around 15%.

The findings, presented here at SCAI 2019 by Usman Baber, MD, MS (Icahn School of Medicine at Mount Sinai, New York, NY), in a featured clinical research session, build off of what was seen in the preliminary results, which showed that while physicians seem to use empiric scales to assess ischemic and bleeding risk, their clinical perception of risk was not aligned.

“The intensity of antithrombotic therapy was primarily inversely related to clinical perception of risk, and this indicates a risk-treatment paradox, and then validated tools to quantify ischemic and bleeding risk in A-fib cohorts actually perform quite poorly,” Baber said. “Ultimately we feel that . . . we need novel tools that can accurately quantify risk and properly inform clinical decisions in these very complex patients with A-fib undergoing PCI.”

As previously reported by TCTMD, the AVIATOR 2 study enrolled 514 patients from 11 US and European centers between June 2015 and November 2017—substantially fewer than their planned goal of 2,500 participants due to terminated funding. At discharge, 66.5% of patients went home on triple therapy, 12.8% received dual therapy primarily with a direct oral anticoagulation (DOAC) and clopidogrel, and 20.7% were prescribed dual antiplatelet therapy (DAPT).

Baber noted that he was surprised to see that two-thirds of patients went home on triple therapy but hypothesized that the results would be different if the study were redone today. “These patients were enrolled between 2015 and 2017, so I think practice is changing extremely rapidly,” he said. “I think some of what we're seeing in the study is probably an initial learning curve and maybe inertia to adopt a new group of strategies.” With the recent publication of the AUGUSTUS and RE-DUAL PCI trials, he added, physicians have been reassured to try an initial strategy of a DOAC with a P2Y12 inhibitor in more patients.

Using a mobile app, researchers queried both patients and physicians about factors related to their risk and care. Interestingly, 85% of physicians said they used a risk score to aid their decision-making—primarily CHA2D2-VASc (73.9%) as opposed to HAS-BLED (40.7%)—and patients said they were convinced about the importance of their therapy, which indicated “some transmission of knowledge to patients in the care pathways,” Baber said. Physicians indicated that safety and efficacy were their two most important factors in prescription decision-making, but patients weighed some of the considerations differently since their concern for ischemic efficacy events tended to be much higher than for bleeding complications.

Medication adherence remained fairly strong over time for those on oral anticoagulants, but was relatively poor for those on antiplatelets, particularly aspirin. For those who began on triple therapy, most had stopped their aspirin by 6 months, with only 31% remaining on triple therapy at a year. In the dual therapy arm, most patients remained on their DOAC but 25% had stopped their P2Y12 inhibitor by 1 year. Lastly, 82.9% of the original DAPT cohort remained as such after 1 year.

As for the reason so many patients stopped aspirin, Baber said much of it was physician-led discontinuation. “Probably what clinicians are doing is maybe they are hedging their bets, sending them home on triple therapy and within the first few months they are stopping aspirin,” he explained. “We're still going to do some more in-depth analyses for that.”

Overall MACE and BARC 2, 3, or 5 bleeding rates were 15.3% and 13.8%, respectively, at 1 year, “indicating that risks for both ischemic and hemorrhagic events are high and comparable,” Baber said. Notably, while the physicians’ subjective and empiric assessments of risk both tracked with outcomes, the researchers showed “quite poor” statistical correlation between each of these predictions and reality.

In a press conference where the results were presented, Chandan Devireddy, MD (Emory University School of Medicine, Atlanta, GA), asked about the fact that both the HAS-BLED and CHA2D2-VASc scores, which have been validated in the past, are not sufficiently discriminating patients, calling this “very provocative.”

In response, Baber said, “If you look at where these scores come from and if you look at the differences between A-fib patients and A-fib with PCI cohorts, we see some [similarities] but some real, substantial differences. The reason these tools in our registry aren’t performing well is because we’re trying to apply tools developed in A-fib, not in PCI populations, to a very different population now. And this is becoming obviously more and more complex with the number of strategies we have available to us.”

We come out with all kinds of predictive risk models all the time and nobody uses them. Sunil Rao

Daniel M. Kolansky, MD (Hospital of the University of Pennsylvania, Philadelphia), who co-moderated the main session, disagreed with Baber’s call for novel risk assessment methods, saying that the “tools are out there” but it might be that more education is needed. “You indicated that physicians perhaps underestimated the extent of bleeding risk, and I think maybe a corollary is that if physicians were putting in the stents or doing the revascularization, they're more concerned about stent thrombosis perhaps than anything else,” he said.

Panelist Sunil Rao, MD (Duke Clinical Research Institute, Durham, NC), agreed. “We come out with all kinds of predictive risk models all the time and nobody uses them,” he said. “You sort of generate a lot of publications about these things and you take the coefficients and create these bedside tools and someone creates an app, and then it just sort of sits on your phone for a while. I’m just wondering, do you think it's also about integrating the tools into the [electronic medical record] or making it so that it's not one more thing we have to do when we're seeing patients?”

Baber agreed, stressing that “one of the things we felt was important was at the end of the day, physicians were making their own decisions—it was based on their own intuitive perception of risk. That was the most significant thing out of everything. Implementation science is something we need to pay attention to because otherwise it doesn't really do any service to our patients.”

Lastly, session co-moderator Sara Martinez, MD, PhD (Providence Medical Group, Olympia, WA), said that “a lot of the assessment of risk I don't think was maybe effectively captured when looking at frailty or capacity for rehab.” She asked: how should physicians factor frailty and potential for cardiac rehab into their decision-making?

“There’s an ARC initiative right now for us to standardize and define high bleeding risk,” Baber replied, noting that assessing elements like malignancy, frailty, and mobility have been lacking. “We captured some of those in the study, but there wasn't very high prevalence. But I do agree. Part of the issue with bleeding may be our inability to capture all the detailed nuanced elements that predict bleeding.”