On the heels of SCOT-HEART, this study begs the question: should anatomy be considered at least on par with stress testing for risk stratification? 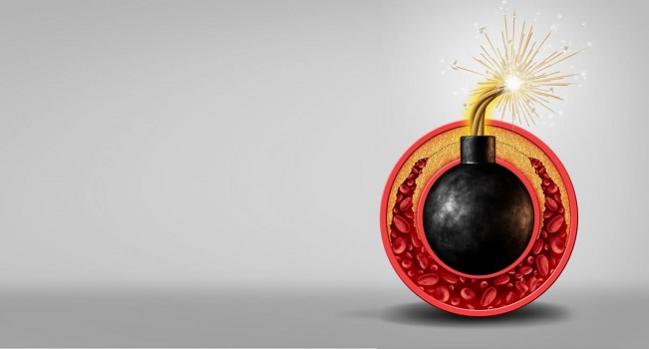 Coronary CT angiography (CTA) can predict the long-term prognosis of patients with suspected—but undiagnosed—CAD at baseline, 10-year observational data suggest. Moreover, the researchers show that coronary CTA results led to clinical risk group reclassification for about two-thirds of all patients.

This study is particularly notable given the recently published SCOT-HEART randomized trial that showed, at 5 years, the superiority of CTA over standard care for patients presenting with chest pain and suspected CAD, commented Gilbert Raff, MD (Beaumont Hospital, Royal Oak, MI), who was not involved in either study. CTA is different “because we see nonobstructive plaque that just simply would never be recognized by the results of a stress test,” he told TCTMD. “A stress test is only going to be positive if there is an obstructive lesion, and there are multiple lines of evidence now from different studies and large-scale registries that nonobstructive plaque is very important in terms of prognosis.”

For the study, published last week in JACC: Cardiovascular Imaging, Finck and colleagues included 2,011 patients who presented to their institution with chest pain and underwent coronary CTA between 2004 and 2008. At baseline, the Morise risk score classified patients at low (20%), moderate (74%), and high (6%) risk of CAD. CTA showed normal arteries in 28% of participants and nonobstructive and obstructive coronary stenoses in 45% and 27%, respectively.

Over a median follow-up of 10 years, the primary composite endpoint of cardiac death or nonfatal MI occurred in 58 patients (3%). CTA-assessed CAD severity correlated with the primary endpoint outcomes better than the Morise score alone. Additionally, the annual event rate for patients with normal coronary arteries at baseline, by CTA, was 0.04%, whereas those with CTA-identified three-vessel obstructive CAD had the highest annual event rate, at 1.33%.

CTA analysis was able to reclassify the baseline clinical risk score in 68% of all patients (P < 0.0001), meaning that only 15% of the original population should have been labeled intermediate risk and 83% as low risk.

“By not only assessing obstructive coronary stenosis but also subtle coronary changes in earlier stages of CAD, coronary CTA can assess the whole range of coronary artery changes,” the authors write. “This, and the high negative predictive value during a 10-year follow-up period as shown in this study, emphasized the particular usefulness of this modality in the low-to-intermediate pretest risk population.”

Given that the clinical Morise score classified the majority of patients as intermediate risk, Finck and colleagues argue that using it “might be unsatisfactory when it comes to clinical decision-making.” Coronary CTA, on the other hand, might be especially useful in low-risk patients “by guiding further preventive medication, at least in cases in which decisions based on clinical risk alone are difficult,” they say.

“This study is unique because the follow-up was so long and the event rate was very low in patients that had no plaque at all, but it was progressively higher depending on the amount of involvement,” Raff highlighted.

In an accompanying editorial, Leslee J. Shaw, PhD, and Subhi J. Al’Aref, MD (Weill Cornell Medical College, New York), added that “a review of the survival curves makes manifest the progressive nature of the disease process, with worsening survival noted among those with evident atherosclerosis.” Also, the “incredible” finding that no disease at baseline is associated with a decade of event-free survival “has not been observed in other areas of noninvasive imaging; for example, a lack of ischemic findings may still belie underlying atherosclerosis and is associated with an elevated risk of events compared to no stenosis or plaque on CTA,” they note.

This could mean that anatomic findings may do a better job of risk stratification than functional measurements, Shaw and Al’Aref write. “This does not call into question the prognostic importance of ischemia and other stress imaging markers but does question whether anatomy should be the core component of all risk assessment strategies. Of course, a greater wealth of evidence is necessary, and the optimal strategy is likely when both physiologic and anatomic data are available.”

Because of these data and that from other studies including SCOT-HEART, Raff argued that the guidelines need to change to include CTA at least on “equal footing” with functional testing. “The amount of evidence is just becoming overwhelming, . . . and there isn't a cost differential,” he said, adding that he would like to see longer-term follow-up of the SCOT-HEART, PROMISE, and PLATFORM trials.

“From the point of view of the interventional cardiologist and the clinical cardiologist, I think this is very important, because they have an option right now to go the way they want and CT is generally available,” Raff concluded. “It's just that everybody has felt that stress testing is the optimal approach, and this makes the case for preventive medicine, which I think is an increasing focus. It's hard to use stress testing for preventive medicine.”

New guidelines for the assessment and treatment of stable ischemic heart disease are expected in 2019.