Increases in repeat revascularization and heart failure do not outweigh the early mortality advantage with culprit-only PCI, the researcher says. 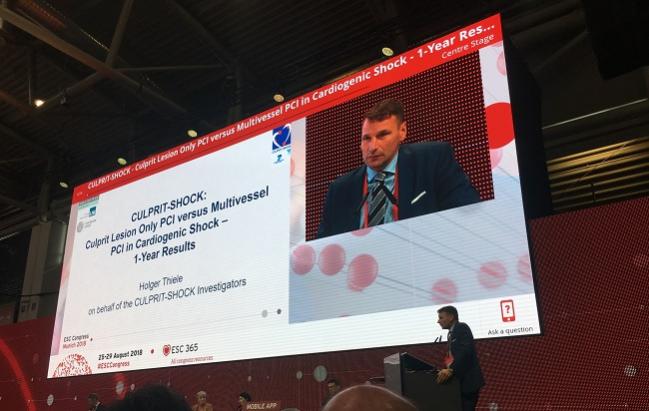 MUNICH, Germany—Longer follow-up in the CULPRIT-SHOCK trial reinforces the advantage of culprit-only PCI, with the option for staged revascularization of significant nonculprit lesions at a later time, over immediate multivessel PCI that was seen at 30 days in patients with acute MI complicated by cardiogenic shock, a new analysis shows.

As previously reported, immediate multivessel PCI increased the risk of death or severe renal failure leading to renal-replacement therapy in the first 30 days in the trial, driven primarily by an absolute 8% difference in all-cause death, leading investigator Holger Thiele, MD (Heart Center Leipzig, Germany), to conclude that opening up only the culprit artery during the index procedure is the preferred strategy.

The heart failure finding was surprising, but on balance, the 1-year results are supportive of the advantage for culprit-only PCI seen at 30 days, Thiele told TCTMD, noting that some evidence—including from a recently reported Korean registry—had suggested that immediate multivessel PCI might improve outcomes with longer-term follow-up, “which is exactly what we haven’t seen.”

Thiele said the new findings also support the change that has been made to the new ESC/European Association for Cardio-Thoracic Surgery guidelines on myocardial revascularization released today, which now include a class III recommendation against immediate multivessel PCI in patients with cardiogenic shock on the basis of the 30-day CULPRIT-SHOCK results.

“The interventional cardiologist treating a patient with cardiogenic shock after an acute myocardial infarction should do only the culprit lesion and later on do a staged revascularization,” Thiele said.

When asked about the higher rate of rehospitalization for heart failure seen following culprit-only PCI, Thiele said there were a few potential explanations. It’s possible, he said, that it could have to do with the higher rate of complete revascularization in the immediate multivessel PCI group, resulting in improved LV function and a lower risk for heart failure. “So maybe we should be even more aggressive in doing full revascularization as a staged procedure for these patients,” Thiele said.

It might also be explained by competing risks, such that culprit-only PCI is allowing more patients to survive, but perhaps with impaired LVEF leading to heart failure, Thiele said.

Julinda Mehilli, MD (Munich University Clinic), who served as a panelist at Thiele’s presentation, told TCTMD that she agrees with Thiele that the 1-year results support the change to the new revascularization guidelines.

“I think this study gives us confirmation of our routine practice, in which we normally focus only on the culprit lesion because these patients have too many problems,” Mehilli said. “They have the hemodynamic problems. They are, in the majority of the cases, intubated. So you have to deal with a lot of problems in these kinds of patients, not only the occluded artery or the stenosed artery. So being fast, which means doing only the culprit lesion, would save the patient from all other complications like bleeding or renal insufficiency.”

Then, if there is a need for further revascularization, it can be done later, Mehilli said, noting: “It’s a policy that we usually use in our routine and CULPRIT SHOCK is giving the support to say, ‘Do the culprit lesion immediately during the index procedure and if you have a sign of ischemia during follow-up you treat the other target lesions.’”