Experts caution that a mortality difference, if it exists, must be borne out in adequately powered trials. 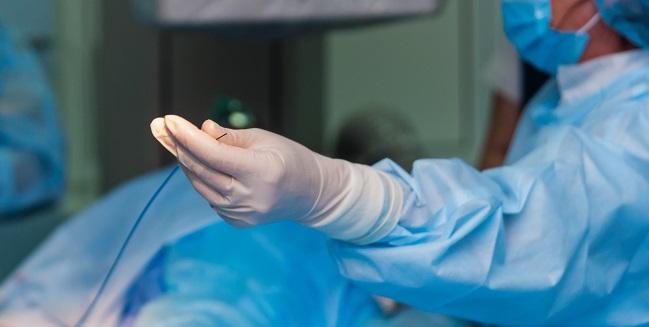 PARIS, France—Compared with plain balloon angioplasty (POBA), a paclitaxel-coated balloon results in better patency and less TLR at 24 months in medium-length superficial femoral and popliteal lesions, new data from the EFFPAC trial show. The study also included an all-cause mortality analysis, which hints that device design may play a role in the signal of risk that has made headlines in recent months.

The paclitaxel mortality question was first raised by the publication late last year of a meta-analysis by Konstantinos Katsanos, MD, PhD (Patras University Hospital, Rion, Greece). In 28 combined trials in which paclitaxel-coated balloons or stents were compared with uncoated balloon therapy for the treatment of lesions in the femoral and/or popliteal arteries, mortality rates did not differ between groups at 1 year but were significantly increased with drug-coated devices at 2 and 5 years.

In a late-breaking trials session here at EuroPCR 2019, Teichgräber offered up new data for this ongoing discussion. At 24 months in EFFPAC, he said, the risk ratio for all-cause mortality with the Luminor paclitaxel-coated balloon (iVascular; Barcelona, Spain) versus POBA was 0.48 (95% CI 0.04-5.10).

“We are one of the only trials which has a risk ratio below 1.00. Most of the other trials have shown some tendency, not really significance, but tendency towards [increased] all-cause mortality,” he noted.

After the presentation, panelist Marie-Claude Morice, MD (Hôpital Privé Jacques Cartier, Massy, France), said while she was happy to see a positive result after all of the recent drug-coated balloon (DCB) controversy, the trial, like many of the other DCB trials in peripheral interventions, is underpowered for the endpoint of mortality and cannot definitively state that the device offers a mortality advantage.

Teichgräber acknowledged the point, but countered that the novel design of the Luminor DCB may lend itself to reducing mortality because it concentrates the paclitaxel in a way that allows it to be delivered to target lesions with less loss of drug beyond the lesion when compared with other DCBs. Although no mechanism has been isolated to explain how paclitaxel-based DCBs may contribute to increased mortality, some researchers have suggested that excess drug retained in the body may cross a line from therapeutic to toxic.

EFFPAC was a randomized controlled trial performed at 11 German centers comparing Luminor and POBA in 171 patients with a single superficial femoral or popliteal lesion ≤ 150 mm in length. All patients underwent predilatation before randomization. Both treatment groups were comparable in terms of baseline characteristics, with high rates of hypertension and hyperlipidemia. The majority had Rutherford class 2 to 4 disease, and a very small percentage had critical limb ischemia.

In previously presented results, the late lumen loss at 6 months, the primary endpoint, was 0.14 mm with the DCB and 1.06 mm with the plain balloon (P < 0.001). Improvements in Rutherford category also were seen for the DCB group compared with baseline and compared with the POBA group.

At 24 months, 88.1% of the DCB group had improved by at least one Rutherford category, as had 85.5% of the POBA group, resulting in a nonsignificant difference (P = 0.441), Teichgräber reported. Quality of life, as assessed by the Walking Impairment Questionnaire and the EQ-5D index, and hemodynamic changes also did not show significant differences between treatment groups.

Following the presentation, session co-chair Benjamin Honton, MD (Clinique Pasteur, Toulouse, France), took issue with the comparisons between DCB and POBA, noting, "Do you not think it is time to move forward and compare DCBs to each other?" Teichgräber agreed, adding it may be the best way to determine differences between the devices.

To TCTMD, Teichgräber added that he believes strongly in the mortality advantage of the Luminor DCB, and said more studies of the device in larger patient populations are needed to bear that out. He added that EFFPAC has a planned follow-up out to 5 years and that he is hopeful to see sustained efficacy with no mortality increase.

PCR, which hosts the EuroPCR meeting, has taken a formal position on the paclitaxel-coated device controversy, releasing a statement at this year’s meeting. In a press conference on Tuesday, Alexandra Lansky, MD (Yale School of Medicine, New Haven, CT), said the results of the Katsanos meta-analysis cannot be ignored and that the field as a whole is calling for “more reliable industry-wide, patient-level, DCB-only pooled analysis.” She also said that PCR “strongly encourages” resuming two trials that were halted in the wake of the Katsanos meta-analysis fallout.

To TCTMD, Lansky said the full statement will not be published until after the US Food and Drug Administration advisory committee meeting, which is scheduled to take place on June 19 and 20 in Gaithersburg, MD. The Circulatory System Devices Panel will further discuss and make recommendations about paclitaxel-coated devices for peripheral interventions, including potential regulatory actions that may be required.

Firehawk Stent Still Holds Up Well to Xience at 2 Years: TARGET All Comers