How Will High-Sensitivity Troponin Tests Affect CTA Use in the ED?

The accuracy and availability of the new test will likely curb the need for CTA, but “grey-zone” patients may require additional CTA imaging, say experts. 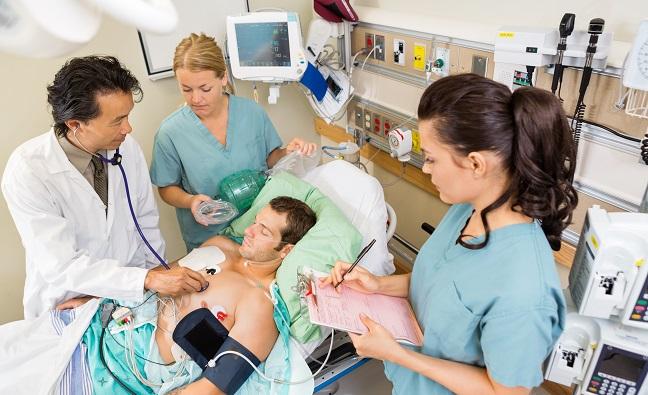 GRAPEVINE, TX—The adoption of high-sensitivity troponin testing will likely affect which patients receive cardiac CT angiography (CTA) in the emergency department (ED), but whether CTA’s use then goes up or down will depend on several factors, according to experts who argued each side during a debate session at the Society of Cardiovascular Computed Tomography (SCCT) annual scientific meeting.

The first high-sensitivity cardiac troponin assay was approved by the US Food and Drug Administration in January 2017, and since then many hospitals around the country have incorporated these much more sensitive tests into routine practice for evaluating patients with suspected ACS.

Prompted by moderator Ron Blankstein, MD (Brigham and Women’s Hospital, Boston, MA), the vast majority of attendees in the standing-room-only session raised their hands to indicate they currently use coronary CTA to evaluate acute chest pain. A smaller contingent, yet still more than half of the room, kept their hands raised when asked if they use high-sensitivity troponin tests.

After incorporating the highly sensitive assays into his own clinical practice recently, Blankstein said, “the big question that we're still asking is: What's the impact on testing and how do we put it all together?”

Less CTA on the Horizon

Taking the side that the new tests will decrease CTA usage, Koen Nieman, MD, PhD (Stanford University School of Medicine, CA), said that “it doesn’t have to be that the role of CT is going to disappear from the emergency ward. I just think it’s just going to change.”

Now, “we can detect myocardial infarction at a much earlier stage that we used to in the past,” he said, citing data that show the assays reach a 95% detection rate within 2-4 hours as opposed to the 10-12 hours with previously available testing options. “In addition to that, . . . we don't have to wait 6 hours to retest. We can retest after 3 hours.” All of this is “very hard to beat with a CT scan,” Nieman added.

The main advantage for high-sensitivity troponin testing is in patients who have had a primary evaluation that puts them at very low risk for potentially having an ACS, he said. “That's where we are using it.”

These patients will no longer need CTA, Nieman argued, since “we can rule out ACS in a way that is more cost-efficient with high-sensitive troponins. [This] doesn't mean that we don't see them anymore, because they might still have stable coronary artery disease. I just don't think that we have to evaluate these patients in the emergency ward. I think we can do a better job as an outpatient.”

There may be “practical complications” currently in the way of this practice in the United States, he acknowledged, but this “should not be the driving reason” against change.

In the future, “I think we will move slightly up where we will be evaluating patients with the higher pretest probability, moving to patients in the ‘grey zone’—the ones that still have EKG changes or it just doesn't want to go away. So I'm not saying there is no role, but I think there will clearly be a changing role for CT in the emergency ward,” Nieman predicted.

CTA Will Serve the ‘Grey Zone’

Deborah Diercks, MD (University of Texas Southwestern Medical Center, Dallas), who took the opposite view—that high-sensitivity troponin tests would either increase or not change CTA use—said that the advantages of CTA are fourfold: it gives an answer, does this quickly, does not require the admission of a patient, and can be available 24/7.

High-sensitivity troponin assays are also quick, she agreed, and can help exclude the diagnosis of an MI. However, as head of the emergency department at her institution, Diercks said she knows she is held accountable to a miss rate of no more than 1% for all ACS diagnoses, including MI, according to survey data. The challenge created with high-sensitivity troponin tests is that they can deliver a result in a “grey zone,” meaning “a value that's not negative and not positive for a myocardial infarction, but somewhere in between,” she explained.

“The big question,” she added, “is do high-sensitive troponins reduce the number of patients who require additional testing?”

This is where risk scores come into play, she said. For example, patients with a HEART score of four or higher have an ACS rate of 2.3% even after the use of high-sensitivity troponin testing, and this “exceeds the comfort level and the kind of standard of care amongst emergency physicians,” Diercks observed.

“We should be reducing testing in those patients with a HEART score less than three and negative high-sensitivity troponin or a troponin below the limit of detection in a 0-1 hour,” she argued. “I do also believe that using high-sensitive troponin shifts the curve and the risk when you combine it with a HEART score of four to six to identify a group that we used to consider high-risk, not suitable for coronary CTA, into a group that is lower risk and that would meet most people’s comfort for undergoing coronary CT.”

As this happens, Dierks said the effect on CTA use “is going to be neutral.”

Coronary CTA is still needed for the same reasons as it always has been—namely that it is fast and always available, she concluded. “But high sensitive troponins now allow us to combine risk stratification tools to identify more suitable patients that are eligible and allow us to identify a group that doesn't need testing at all.”

Rebutting Diercks’ arguments about CT being available 24/7, Nieman asked for a show of hands for which physicians could readily order a CT scan at 2 AM in their institution, and nobody raised their hand. “And that's the problem,” he said. “We don't have [24-hour CT available]. At our institution we tried it for a while, and it wore out our team. And everybody started hating each other.”

Nieman also argued that “the primary role of the ED is to . . . make sure that somebody survives until their next office visit. It's not to diagnose coronary artery disease.

“I would really prefer to rule out an ACS by whatever means and then have the patient come back 2 days later and we do a beta-blocked, nitroglycerin CT scan with some nice functional color in there to get really the right answer for these patients,” he continued. “I love doing CT scans and I think we should get the most out of CT scans that CT has to offer.”

Additionally, she said, because of the current setup of the US healthcare system, “we can't get appointments with anybody in 2 days. So making that rapid appointment is really difficult.”

It is possible, however, to “figure out a way to match a patient's needs with the health system we work in.” Diercks argued. “I'm not going to every expect my radiologists to actually read a film 24/7. But if I can get them done 24/7 and provide ample times to get that read when it's easier for my colleagues to do it, I've still taken a very patient-centric approach in that I've decreased the time that patient needs to spend in the hospital by using a test that's expedited.”

Blankstein added that this is a “hotly debated” issue that even guideline committees find “very challenging as well.” He noted that when he sees patients in the clinic a few days after an ED visit, “I certainly use whatever information or whatever happened in the ED to help decide on long-term care.”

Following the debate, session chair and SCCT President-Elect Suhny Abbara, MD (University of Texas Southwestern Medical Center), told TCTMD that future research will help elucidate the role of high-sensitivity troponin assays in the future. “We all have to learn what's best, and I feel we have to look at large big data once we have these implementations to then judge whether or not what we thought are the right approaches, the flow diagrams we've seen, whether they are the most effective. So we will have some work to be done,” he said.

Abbara thought both Nieman and Diercks “were leaning towards this” process despite some nuance in whether CT should be done in an outpatient or inpatient setting. “But there will be a substantial number of patients with acute chest pain that will [receive] a CT” either way, he added.

It is important to note, Abbara said, that some emergency departments in the US serve a large population of patients who “will not show up and come back to an outpatient visit. In a very organized setting where patients do come back for that, perhaps [ordering CT in an outpatient setting] would be feasible. But I know some institutions, a county hospital of ours for example, where they lose a lot of patients to follow-up, and that would favor doing the CT right there and then when they're there.”