Experts had concerns that the trial design does not lend itself to firm conclusions about short-duration DAPT in this setting. 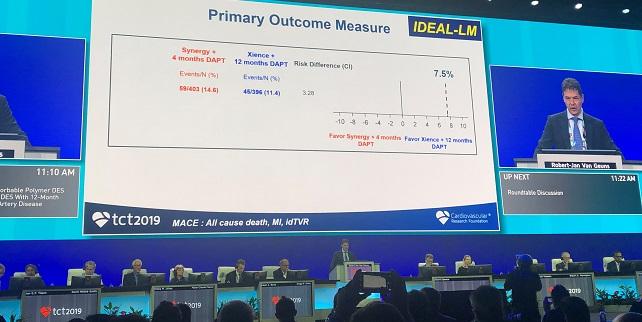 Presenting the results during the late-breaking clinical trials session at TCT 2019, Robert-Jan van Geuns, MD, PhD (Radboud University Medical Center, Nijmegen, the Netherlands), reported that the 12-month rate of major adverse cardiac events, a composite that included all-cause mortality, MI, and ischemia-driven target vessel revascularization, occurred in 14.6% of patients treated with DAPT for 4 months following implantation with Synergy and 11.4% of patients treated with DAPT for 12 months after receiving the Xience stent (P = 0.17).

Based on their findings, van Geuns said the trial “confirms the excellent outcome of current angioplasty techniques in left main coronary artery disease” and that short-term DAPT is an “also an option in the left main subset” of patients with the latest DES design. “A lot of interventional cardiologists will say, ‘If I did a left main, I will never do short DAPT,’” he said during a morning press conference. “I think we have shown that it’s a possibility.”

Marco Valgimigli, MD, PhD (University of Bern, Switzerland), who was not involved in the study, said he can’t understand the rationale for shortening DAPT to 4 months based on the stent selected rather than on individual patient characteristics.

“The guidelines suggest DAPT duration should be based on each individual’s ischemic and bleeding risk rather than the type of stent that has been implanted or the location of the stent implanted,” he said. Given the trend showing higher rates of definite/probable stent thrombosis with Synergy/4-month DAPT, as well as the large noninferiority margin used in the trial, these new data do not provide “very reassuring information,” he said.

Robert Harrington, MD (Stanford University, CA), praised the investigators for conducting the trial but also cautioned against the IDEAL-LM investigators’ interpretation of the data. “I think it’s a potential classic type 2 error,” he said during the press conference. “The failure to observe a difference is not the same as there being no difference. In fact, as has been said, all of the data is suggesting there is somewhere in range of doubling of risk. I don’t think you should conclude that this is an option. I think you should conclude this is worrisome and more data is needed.”

IDEAL-LM was an investigator-initiated all-comers trial conducted at 29 sites across six countries between 2014 and 2016. Investigators randomized 818 patients to PCI with Synergy and 4 months DAPT or Xience and 12 months DAPT. Of those randomized, more than 93% were considered eligible for surgery but physicians opted for PCI in the majority of cases because of the patient’s low SYNTAX score. Comorbidities and ACS presentation were other reasons for selecting PCI over CABG surgery. More than 37% of patients in the trial presented with ACS, including 17.1% with STEMI.

“Left main PCI is increasing rapidly around the world after the EXCEL and NOBLE studies, but this is still a little different procedure than a standard procedure because of the amount of myocardium at risk,” said van Geuns. “Even more, there is a high frequency of bifurcation lesions and that potentially results in two stents, either overlapping and continuing into the LAD or circumflex artery. As for these specific patients, we don’t know anything about the optimal duration of postprocedure DAPT.”

With the novel stent technology with its bioabsorbable polymer and thin struts, van Geuns said they hypothesized it would be ideal for short-duration DAPT without compromising clinical outcomes.

Regarding the findings, van Geuns pointed out the researchers observed no stent thrombosis between 4 and 12 months. “If you look at the ischemic events, they are both in the early and late period,” he said. Nonetheless, van Geuns told TCTMD he’s uncertain what to make of the findings. He pointed out that data from the Bern registry showed a higher rate of very early stent thrombosis with Synergy compared with Xience. “We’re absolutely underpowered [to look at stent thrombosis],” he said. “It has been seen before but we need more data before we can give a better answer if there is a true effect or not. It’s a matter of investigating this better to determine if there is something in the design that would favor one [stent] or another.”

The higher rates of bleeding with Synergy and short-term DAPT is likely a play of chance, he said.

Confusion About the Findings

At their center, van Geuns stressed, the duration of DAPT in patients with left main coronary artery disease is based on patient characteristics and not the stent selected. He added that many clinical trials comparing the optimal duration of DAPT, including the large TWILIGHT trial, excluded patients with left main disease. Given their new data, if the patient is considered high risk for bleeding, they now feel comfortable stopping DAPT at 4 months if the patient has received the Synergy stent. van Geuns said their study also shows that left main PCI is associated with very low MACE rates in the first 2 years.

“If the heart team decides PCI is an option, the outcomes are extremely good,” he told TCTMD.

For Roxana Mehran, MD (Icahn School of Medicine at Mount Sinai Hospital, New York, NY), who led the TWILIGHT trial looking at short-term DAPT duration in patients at high risk for bleeding, IDEAL-LM’s study design makes it difficult to tease out why there is a higher number of ischemic events in the patients treated with Synergy/4 months of DAPT.

“The difficult part here is that this is a very important question and if you want to answer the question of a patient with left main disease at high bleeding risk, and in whom you want to reduce the DAPT regimen, then you should choose those types of patients, enroll and randomize them to short versus long duration,” she said. “But you’re going to need large numbers of patients. It’s difficult to do.”

Vijay Kunadian, MD, MBBS (Newcastle University, Newcastle-upon-Tyne, England), who spoke with the media, said she’s also uncertain what to do with the IDEAL-LM results when she returns home to clinical practice. Like others, she noted the trial compares two different stents and two pharmacologic approaches, which makes interpreting the findings difficult. The results would have been clearer if the trialists used the same stent (to compare 4 versus 12 months DAPT) or the same duration of DAPT (to compare Synergy versus Xience).

In the United States, PCI is considered “reasonable” in selected patients with isolated left main stenosis involving the ostium or shaft without coexisting multivessel disease (class IIa). For patients with distal bifurcation or less complex coexisting multivessel disease (class IIb). The US guidelines recommend against PCI for patients who are good candidates for surgery. In Europe, the 2018 revascularization guidelines award PCI a class I recommendation for patients with left main disease and a low SYNTAX score. For those with an intermediate and high SYNTAX score, PCI is a class IIa and III recommendation, respectively.

The ideal duration of DAPT in patients with left main coronary artery disease is currently unknown, although the guidelines suggest patients undergoing complex PCI, such as those with bifurcations requiring two stents, receive DAPT for 6 months or longer. Robert Byrne, MD (Deutsches Herzzentrum, Munich, Germany), one of the panelists during the late-breaking session, said the ideal duration of DAPT in left main disease remains a critical issue. Based on his experience, a 4-month duration of DAPT would not be an approach he’d favor and is not certain IDEAL-LM provides enough evidence for such a short regimen.

“The message I take from this is that the outcomes in contemporary left main PCI with expert operators—80% [performed with] radial and 40% with IVUS—are better than expected in both groups,” said Byrne. “I do have some concerns about the 3.5% difference in the primary endpoint between the [treatment] groups.”

CABG vs PCI in Left Main Disease: The Debate Continues