TAVR patients are less likely to be develop anxiety/depression than surgery patients, but if either aren’t discharged home both fare equally poorly. 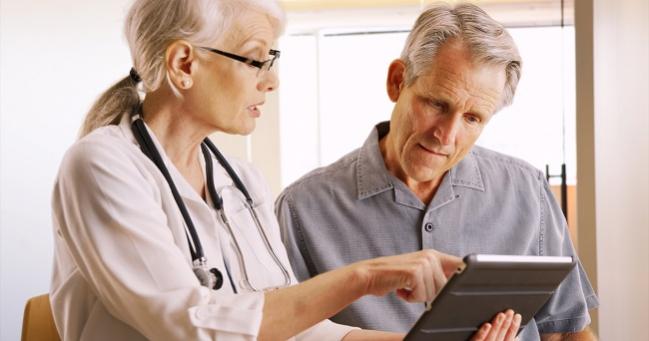 Despite better psychological outcomes among the TAVR-treated patients, investigators caution that the rate of anxiety/depression is very high after either procedure, with roughly 25% of patients developing either anxiety or depression after valve replacement. If patients are discharged to a rehabilitation or nursing facility instead of home, roughly 40% become anxious or depressed.

“As people leave the hospital, we need to expect that there is going to be anxiety or depression in the transition period, particularly if things don’t go as well as we’d have liked or if somebody isn’t going home,” said J. Matthew Brennan, MD (Duke University Medical Center, Durham, NC), at the 2018 Structural Heart Disease Summit. “Those rates of anxiety or depression are really high. But even if things do go smoothly, there is a clinically significant differential that we see between transcatheter and surgical valves.”

The bottom line, said Brennan, is that the patient’s postoperative quality of life needs to be scrutinized. “One in four patients—and that’s just those that received a new diagnosis,” said Brennan. “That’s a pretty high bar, especially if you think of all the patients who are anxious or depressed and don’t want to talk to their doctors about it.”

To TCTMD, Brennan noted that in the United States, most patients undergoing TAVR are discharged from hospital roughly 1 to 2 days after the procedure and this doesn’t leave a lot of time to have a discussion about what to expect in the coming weeks, months, or even year. “Transcatheter valves in today’s world are viewed as a minimally invasive procedure, and once we’ve done a successful procedure, much like in PCI, we’re often not thinking about what the patient will go through,” said Brennan. “Even if it is a perfectly smooth procedure, there is a recovery process and I don’t think that’s necessarily on our radar.”

Using data from the MarketScan Commercial and Medicare Supplemental databases, the researchers identified 1,418 patients who underwent TAVR and 7,979 patients treated with surgery between 2011 and 2016. None of the patients reported depression or anxiety in the year before treatment. The patients undergoing TAVR were older (82 vs 71 years, respectively), more likely to be female, and more likely to have congestive heart failure, diabetes, and renal failure compared with the surgical patients.

Overall, TAVR patients were less likely than those treated surgically to experience depression or anxiety 1 year after the procedure (23% vs 27%; P < 0.001). Among those discharged to a facility other than home, there was no significant difference in the rate of new-onset anxiety or depression between those treated with TAVR and those undergoing surgery. For those discharged home, the difference in anxiety/depression between the procedures remained, with 23% of surgery patients and 19% of TAVR patients reporting anxiety/depression at 1 year (P < 0.05).

“If you were discharged somewhere other than home, it really didn’t matter whether you got a surgical or transcatheter valve,” said Brennan. “People were anxious and rightfully so. They were anxious and a lot of them were depressed. If we have a patient that needs to go somewhere other than home because of something that comes up during the hospitalization period—and this happens with a lot of our surgical patients, and hopefully less with TAVR—we really need to be counseling the patient and giving them the resources to deal with anxiety and depression.”

If a patient is discharged to a facility other than home, Brennan told TCTMD that physicians should expect the onset of anxiety or depression so they are ready to offer solutions or possible treatments. Earlier this year, an analysis of the Frailty Aortic Valve Replacement (FRAILITY-AVR) study found that more than 30% of individuals aged 70 years and older undergoing TAVR or surgery had a positive diagnosis for depression, and that depression, in turn, was associated with a threefold increased risk of death at 12 months.

Steven Yakubov, MD (OhioHealth/Riverside Methodist Hospital, Columbus, OH), who moderated the session, noted the rates of new-onset anxiety and depression were very high and appeared to increase over time. To TCTMD, he said interventional cardiologists simply aren’t trained or equipped to treat patients with anxiety or depression following valve replacement.

“I do think evaluating the patient and delivering appropriate expectations to the patient can’t be emphasized enough,” said Yakubov. “Such as, ‘Here’s what you can expect after the procedure—it’s not unusual for you to experience some anxiety afterwards, but we intend to get you better than you were before.’ If we emphasize the benefits of the procedure—such as being to walk a little quicker, being less short of breath—hopefully we can alleviate that a little bit.”

For Brennan, he suspects that as hospital length of stay declines, there will be even less time for physicians to communicate with patients. This means the time prior to the procedure is invaluable for preparing the patient and his/her family for what life will look like after TAVR or surgery, said Brennan. He stressed that after surgery or TAVR, peer-to-peer support with another person who also underwent the procedure would be beneficial as it would help align expectations or provide reassurances about the nature of recovery.

“We spend a lot of time in our practice figuring out a way to deploy valves and that’s appropriate,” said Brennan. “One of things we don’t spend enough time on as interventionalists is helping patients understand what the process is going to be like after the valve is deployed and what recovery is going to look like. When we think about our outcomes, we have to consider the whole experience of the patient.”

Many patients, particularly those treated with the minimally invasive approach, are under the impression they will return home and immediately resume normal, day-to-day activities after a short postoperative recovery period. When things don’t go as planned and expectations get throttled, some anxiety or depression is quite natural, said Brennan.

1 year ago
Yes, some depression and anxiety is quite natural but people need to consult nearest cardiologist(https://www.maxcurehospitals.com/hitechcity-madhapur/cardiology.html) for any difficulties in post surgery.