OCT Proves Predictive in Diabetic Patients, Even in FFR-Negative Lesions

The findings rekindle the conversation over both ischemia’s relevance and the utility of pinpointing vulnerable plaques. 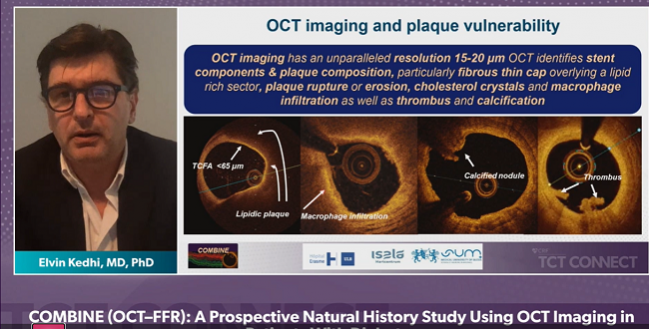 In diabetic patients with lesions that don’t warrant intervention based on fractional flow reserve (FFR), optimal coherence tomography (OCT) may help to pick up which are likely to pose problems down the road. That’s the upshot of COMBINE OCT-FFR, a natural history study presented by Elvin Kedhi, MD, PhD (Liberal University Brussels, Belgium and the Hopital Erasme and Silesian Medical University, Katowice, Poland), during the opening late-breaking clinical trial session at TCT Connect 2020.

All three presentations in this block dealt with the use of intravascular imaging to detect so-called vulnerable plaques and what might be done about them. Kedhi, speaking with TCTMD after his presentation, acknowledged that intravascular imaging for plaque characterization is a highly specialized area of research within an already specialized field. As such, using two different imaging techniques—FFR for function and OCT for visualization—would be exceedingly rare outside of a research setting.

Even so, he said, “this is not about having a hobby in intravascular imaging. It is understanding what we are treating and what is the risk of these plaques.”

Doing so is particularly important in the wake of the ISCHEMIA trial, which demonstrated no benefit to an invasive strategy on top of optimal medical management even in patients with documented ischemia, Kedhi said. But even among medically managed patients in that trial, 10% went on to have a myocardial infarction over 5 years.

“I'm an interventional cardiologist, and my job is to treat lesions,” Kedhi told TCTMD. “But in the last few years, we are rethinking the way we are doing our jobs and we are rethinking our revascularization strategy.” Telling a patient with stable coronary disease placed on medical therapy that he still has a one in 10 chance of an MI is not an easy message to give, he continued. What COMBINE OCT-FFR “clearly demonstrates,” is that despite not being ischemic, some lesions will go on to produce clinical events.

COMBINE OCT-FFR enrolled 547 patients who underwent FFR and if their results were positive (FFR ≤ 0.80) they were sent for revascularization. If negative (FFR > 0.80), they underwent subsequent OCT and were then further segregated according to whether or not a high-risk thin-cap fibroatheroma (TCFA) was identified. Target-lesion MACE (cardiac death, target-vessel MI, clinically driven TLR, or hospitalization due to unstable or progressive angina) rates were then compared between the FFR-negative TCFA groups, for the primary endpoint, as well as between the TCFA-positive and FFR-positive revascularized patients, for a secondary endpoint.

This is not about having a hobby in intravascular imaging. It is understanding what we are treating and what is the risk of these plaques. Elvin Kedhi

At 18 months, rates of target lesion-related MACE were significantly higher among 97 TCFA-positive patients than in the 291 patients who’d been TCFA-negative at enrollment on OCT: 13.3% versus 3.1% (HR 4.7; 95% CI 2.0-10.9). Rates of target-vessel MI, clinically driven TLR, and hospitalization were also significantly higher among the TCFA-positive patients. Strikingly, there were no significant differences in major events between the patients identified as high risk on FFR, who’d undergone revascularization, and the FFR-negative patients found to have a TCFA on OCT.

“COMBINE showed for the first time that in diabetes patients, more than 25% of all FFR-negative patients, so nonischemic patients, had high-risk plaques carrying TCFAs. Presence of TCFA is a strong predictor of future MACE, despite the lack of ischemia,” Kedhi concluded. “The new insight I think we get from this is that ischemia and future adverse events represent, to a large extent, two separate concepts and that combined FFR and OCT can improve the accuracy of high-risk lesion patient identification and should therefore be embraced in our clinical practice.”

Adding OCT to FFR in his practice, he estimated, adds on average just 5 minutes.

Commenting on the results following Kedhi’s “virtual” presentation to the press, Adnan Kastrati, MD (Deutsches Herzzentrum München, Munich, Germany), pointed out that there are now three different methods for evaluating vulnerable plaque: IVUS, for plaque burden, near-infrared spectroscopy (NIRS) for lipid core burden, and OCT for identifying thin-cap fibroatheromas. What’s not clear, he said, is what technology is best for identifying a plaque that could truly put a patient at future risk.

Renu Virmani, MD (CV Path Institute, Gaithersburg, MD), also a panelist during the press conference, made the point that despite all of the advances in cardiology over the last 50 years, sudden death as the first manifestation of coronary artery disease has not decreased. This study, she continued—along with PROSPECT II, presented in the same session—hints that there may one day be “something we can do for people who are high risk.”

That said, she added, her hope is that the solution would be a medical one, not an invasive one. “Stents have their own problems,” she said. “I would first like to see if we could really prevent [events], with high-dose statins or aggressive therapy that would be medical [rather than invasive].”

Armin Arbab-Zadeh, MD, PhD (Johns Hopkins University School of Medicine, Baltimore, MD), who commented on the study for TCTMD, pointed out that it has two “essential” problems. The first is that the TCFAs have been shown in other work to be surrogates for larger plaque burden more broadly, making it difficult to know that a single plaque is responsible for a specific outcome. Moreover, the major outcome differences reported in this study were largely driven by symptoms, not acute coronary events. “So essentially these kinds of studies are predicting something very intuitive, which is that if you have more plaque at baseline, greater lesion severity, and greater lumen narrowing, that you will eventually at follow-up be more likely to require revascularization or have symptoms associated with it,” he explained.

Stents have their own problems. Renu Virmani

What’s more, Arbab-Zadeh noted, even if the link between the identification of a TCFA and outcomes was “true . . . what are you going to do about it?” Plaque rupture happens all the time, as a part of natural vascular processes, without causing events, he said. A more intriguing area of research, he continued, is whether metabolically active plaque burden identifies a patient who needs more intensive follow-up. That said, the concept of a single vulnerable plaque as a target for therapy “isn’t going to go away,” Arbab-Zadeh acknowledged, “because there is a lot of commercial interest and conceptual interest in this field, so it will prevail.”

Ajay Kirtane, MD (NewYork-Presbyterian/Columbia University Irving Medical Center, New York, NY), speaking with TCTMD, hinted that it’s not likely that FFR and OCT would be used in combination, clinically, anytime soon. “It’s premature to advocate screening patients with both physiology and imaging in this way because it might not be actionable, the therapy may still be just really making sure that the patient’s medical therapy is adequate. I think [COMBINE OCT-FFR] just emphasizes that this is a dynamic disease, a dynamic process, and a static picture at one point in time that is reassuring in terms of flow or pressure does not tell me that the patients is protected from future events.”

For Kirtane, COMBINE OCT-FFR serves as a timely reminder that diabetic patients remain at high risk for future events and that coronary disease “is a systemic disease and we need systemic therapies. It may be that, at some later point, we may find that specific therapies can prevent future events, but that’s something that needs large, randomized studies. I don’t think anyone is advocating treating these lesions at present.

“Whether you are invasive or noninvasive cardiologists, if we could identify vulnerable lesions and target therapies to those lesions, everyone would be happy,” he continued. “But how we do that is as yet unproven.”

Just One-Third of European Patients Get to LDL Cholesterol Goals

ISCHEMIA: Invasive Strategy No Better Than Meds for CV Events

Complete Revascularization Benefits May Be Due to Stenting Vulnerable Plaques