Pending safety data, along with hard endpoint trials, the novel siRNA inhibitor could prove a more convenient option for patients at high risk of CVD. 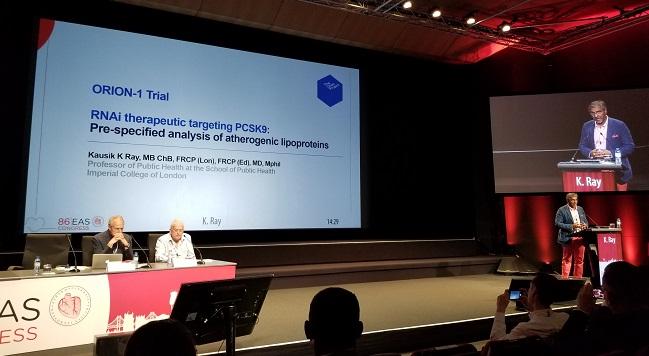 Previous results from the trial, as reported by TCTMD, have demonstrated a sustained reduction in LDL cholesterol over 1 year with inclisiran (The Medicines Company), particularly when patients are treated with a two-dose regimen. In ORION 1, the drug was studied in patients at high risk for cardiovascular disease who had elevated LDL cholesterol levels. A chief attraction for this investigational drug class is its proposed dosing schedule: just two injections in the first 90 days, followed by biannual injections thereafter. Currently approved PCSK9 inhibitors require monthly or bimonthly injections.

“What we see now is that obviously LDL is important, but ultimately you want to reduce particle number and total cholesterol content because it's got relevance for people with diabetes insulin resistance, et cetera,” lead study author Kausik Ray, MD (Imperial College London, England), who presented the updated findings last week at the 2018 European Atherosclerosis Society (EAS) meeting, told TCTMD.

The data, simultaneously published online ahead of print in Circulation, show 46% and 41% reductions in non-HDL cholesterol and apolipoprotein B, respectively, among patients who received two doses of 300 mg inclisiran over 180 days. For those who only received a single dose of 200 mg, these same lipoproteins were still reduced by 25% and 23%, respectively. Every patient treated with two doses of 300 mg inclisiran had a reduction in both apolipoprotein B and non-HDL cholesterol at 180 days.

Overall, there were large variations among individuals as to measurements of VLDL cholesterol, triglycerides, and Lp(a) reductions on the various inclisiran doses.

‘The Convenience Factor Is Incredible’

Pending safety data of the two-dose regimen, which Ray expects will be presented in late 2019, these data support that inclisiran “could well be a viable and more convenient approach than a monoclonal antibody.” Because of the fact that patients only receive injections every 6 months following the initial two doses given 90 days apart, he said, “the convenience factor is incredible.”

Even with highly effective monoclonal antibodies on the market like alirocumab (Praluent; Regeneron/Sanofi) and evolocumab (Repatha; Amgen), compliance and adherence are still problems, Ray observed. “Relying on a patient to take it every 2 weeks? Still a big ask actually.” But with inclisiran, even if a patient declines additional treatment, the drug stays in their system and continues to be effective for up to a year.

Just how long inclisiran stays in the body and what its long-term effects might be are issues that critics might cite, he admitted, but its persistence speaks to “the stability of the compound.” The drug’s manufacturer, Alnylam, has been working on a method of reversal “to allay concerns, but none of us are really concerned about LDL really being too low,” he said. “And it's very different to a small molecule, for example, which goes into lots of tissue. This is very specific for the liver and it gets taken up there and it just shoots down the messenger RNA.”

Drug developers are moving forward with a large, pivotal trial addressing the impact of inclisiran on hard outcomes, using the 300-mg dosing regimen described by Ray at EAS 2018. The ORION-4 trial will randomize approximately 15,000 subjects with stable atherosclerosis (prior MI, prior stroke, or peripheral artery disease) to either inclisiran or placebo, with a primary endpoint of coronary heart disease death, MI, stroke, or urgent revascularization over a follow-up of 4 to 5 years.

The potential cost of the drug remains unknown, but “to make inclisiran, because it's basic chemistry, would be a lot less expensive than making a monoclonal, because you don't have to go through all the multitude of purification steps,” Ray said. “Having said that, people still want to make money out of innovation, but the company publicly has talked about it being about a third of the price of the monoclonals, so actually it becomes a lot more cost-effective in that regard.”

Session co-moderator François Mach, MD (Geneva University Hospital, Switzerland), told TCTMD that he expects inclisiran to “cost much less, if not 10 times less” than drugs like alirocumab and evolocumab, which hit the market at approximately $14,500 per year, although both drugmakers are in the process of negotiating cheaper prices. “We're speaking of a couple of hundred [pills] per year versus two injections,” he said. “If you can reduce by two injections a year 50-60% of your LDL, this will be affordable and probably the cost benefit of these new silencing RNAs at least for PCSK9 will be interesting.”

In many countries, PCSK9s “are either expensive or the threshold for initiation of a monoclonal are high and is set on cost-effectiveness,” Ray said. If the less-expensive inclisiran becomes an option, “that threshold would then come down, and therefore actually these people who currently have no option would have an option,” he predicted.

Asked whether inclisiran sounds too good to be true, Mach acknowledged the possibility, but said the phase III trials, which are being executed with a crossover design including the monoclonal antibodies, will give a more definitive answer.

“We know LDL is causal. We know if you maintain a large enough difference in LDL cholesterol, you will see a benefit. We know this drug lowers LDL cholesterol,” Ray concluded. “So unless we see any attenuation of effect or any safety signal, we have no reason to believe that this is not going to be how we're going to practice in the future.”

NOACs Perform Worse Than Warfarin in Real-World Study, Especially When Adherence Is Low

PCSK9 Inhibition and Other New Therapies for Lipid Modification: Good News and Bad