Ten years in the making, the data suggest PCI and CABG are equivalent for treating left main disease, but CABG remains superior for multivessel disease.

SAN DIEGO, CA—Long-term follow-up from two new studies—MAIN-COMPARE and SYNTAX Extended Survival (SYNTAXES)—provide new insights into the relative strengths and weaknesses of PCI and CABG for the revascularization of coronary artery disease.

In SYNTAXES, which was presented yesterday during the late-breaking clinical trials session at TCT 2018 by Daniel Thuijs, MD (Erasmus University Medical Center, Rotterdam, the Netherlands), investigators reported no overall survival advantage between PCI or surgery at the decade mark, but did observe advantages depending on the type of coronary artery disease.

The investigators cautioned, however, that data collection from SYNTAXES is not yet complete. At the time of the TCT presentation, they had obtained follow-up data from 72% of patients enrolled in the trial.

Speaking with the media during a morning press conference, Thuijs said 5-year data from SYNTAX—a study that randomized 897 patients to CABG and 903 patients to PCI with the first-generation Taxus stent (Boston Scientific)—showed that all-cause mortality was not statistically different between the two revascularization strategies, “but the curves started to diverge at 1-year follow-up and continued to diverge up until 5 years, at which point the trial was ended.” For that reason, the researchers sought to determine if either of the revascularization strategies yielded a survival benefit.

Speaking with TCTMD, Gregg Stone, MD (NewYork-Presbyterian Hospital/Columbia University Irving Medical Center, New York, NY), said that one of the limitations of SYNTAXES is the use of a first-generation drug-eluting stent. These earliest devices are associated with increased inflammation and higher rates of late stent thrombosis, and these data are not relevant to the contemporary drug-eluting stent era. Still, the results are consistent with current clinical practice. For patients with left main disease at low-to-intermediate risk who can undergo complete revascularization, PCI is an option. For those with left main disease and a high SYNTAX score, surgery is preferred, said Stone.

Commenting on the results during the morning press conference, Morton Kern, MD (VA Long Beach Healthcare System, Irvine, CA), pointed out that while there was no long-term difference in all-cause mortality between CABG and PCI in patients with left main disease, “not all left mains are the same.” For example, such patients might also have pulmonary vessel disease or poor left ventricular function, proximal versus distal disease of the left main artery, or diffuse disease in other coronary arteries.

“I’m a little bit reluctant to take on highly complex PCI—left main with multivessel disease and all the bifurcations,” said Kern. “Even though it’s feasible, it’s not the best approach. We still do surgery in some patients. I know it’s heresy to say that but we do surgery and I think this study supports that approach as well. Even though we like to ‘wash out’ the left main and say they had equal outcomes, all left main [arteries] are not equal.”

Stone agreed, noting the long-term prognosis of patients is dependent on the extent of coronary artery disease outside the left main artery.

Vinod Thourani, MD (MedStar Heart and Vascular Institute, Washington, DC), who was not involved in the studies, congratulated investigators for completing 10-year follow-up in the trials, noting that such rigorous follow-up is extremely challenging. While long-term comparisons might lead to conversations about whether one revascularization approach “wins out” over the other, Thourani believes the data reinforce the need for team-based discussions about personalizing patient care.

“We need to talk about this before patients get approached about either procedure,” Thourani told TCTMD. “We need to say, ‘Look, in 10 years, we think this would be better for you to have this procedure given your disease process.’ I think that’s the conversation we need to get a little bit better at having with our patients. You need to have a team-based discussion before you can implant a transcatheter valve, but we’re not doing that for PCI or CABG.”

In the workup for patients with aortic stenosis in need of valve replacement, such conversations are written into the clinical guidelines, and yet the average age of the patient undergoing coronary revascularization is considerably younger. “A heart team assessment allows us to find the best therapy for the individual patient when we think we know their life expectancy,” he said. “Once we think we know their life expectancy, the surgeon and the cardiologist can start making rational decisions.”

In the 10-year follow-up of MAIN-COMPARE, an observational study comparing clinical outcomes of stents, including bare-metal and drug-eluting stents, against CABG surgery for the treatment of left main coronary artery disease, investigators showed there was no significant difference in the risk of death and other clinical outcomes between the two revascularization strategies. 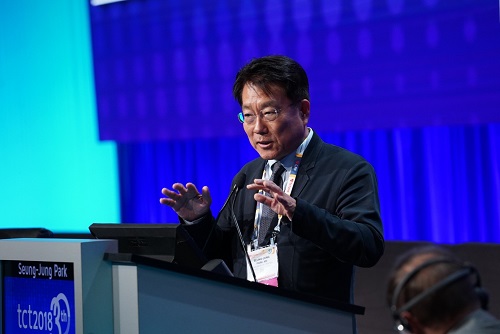 However, the benefit of CABG surgery diverged over time, with investigators reporting that the use of drug-eluting stents was associated with an increased risk of death, as well as the composite endpoint of death, Q-wave MI, or stroke, among patients treated with drug-eluting stents. Investigators, led by Seung-Jung Park, MD, PhD (University of Ulsan College of Medicine, Seoul, Korea), suggest that patients treated with bare-metal stents were likely lower-risk patients. Once drug-eluting stents were commercially available, PCI for left main coronary disease was expanded into a broader range of patients with advanced clinical and anatomical complexity.

To TCTMD, Thourani said MAIN-COMPARE hinted at a clinical benefit of surgery once researchers move beyond 5 years. In EXCEL and NOBLE, two trials studying PCI versus CABG surgery for left main coronary artery disease, the study duration was just 3 and 5 years, respectively. “Once we’re operating on 60-year-olds who are expecting to live for 10 or 20 years, we have to start thinking not only about the short-term benefit but also the long-term benefit,” he said.

Thourani also noted that despite extensive propensity-matching between the surgically- and PCI-treated patients in MAIN-COMPARE, it might be difficult to account for confounding variables, such as frailty. For example, a patient with extensive comorbidities, such as morbid obesity or cancer, is more likely to undergo PCI rather than CABG surgery. This can skew all-cause mortality outcomes in favor of the surgical arm. “Chances are that patient isn’t living 10 years,” he said.

Stuart Head, MD, PhD (Erasmus University Medical Center, Rotterdam, the Netherlands), one of the panelists during the late-breaking trial session, said the short durations of EXCEL and NOBLE, as well as the conflicting results, have left some indecision when it comes to revascularization for left main coronary disease. That said, the left main data from SYNTAXES looks promising, Head told TCTMD.

CABG Bests PCI for 5-Year Survival in Biggest Analysis Yet, With Options for Left Main Disease