While there are many unknowns and a dearth of randomized data, experts say the results are a welcome addition to the field.

Ultrasound-assisted thrombolysis was no better than standard catheter-directed delivery of alteplase when it came to clearing thrombus in patients with submassive pulmonary embolism (PE) in the SUNSET sPE trial, the first head-to-head comparison of interventional PE therapies.

Reductions in the amount of pulmonary thrombus within 48 hours were not significantly different between trial arms using either the refined Miller score (P = 0.76) or CT obstruction index (P = 0.77), researchers led by Efthymios Avgerinos, MD (University of Pittsburgh Medical Center, PA), report. Mean lytic dose and duration of treatment were similar in the two groups. 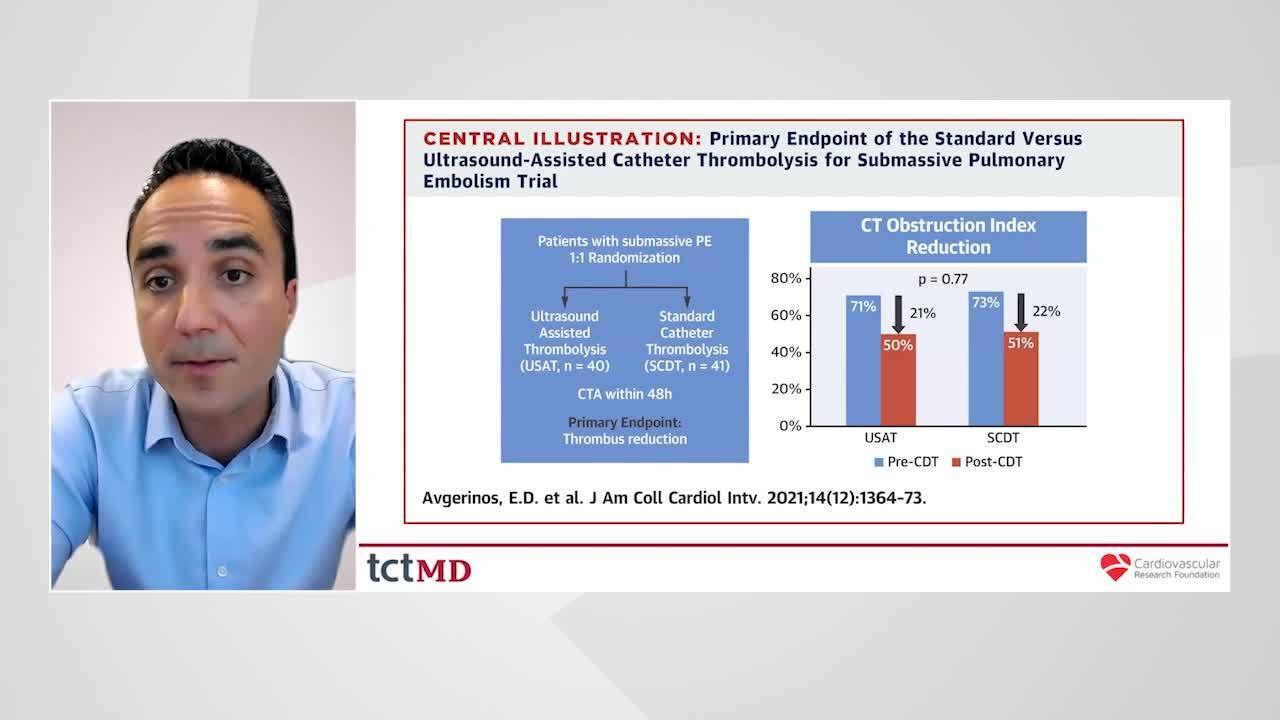 Commenting on the results for TCTMD, Akhilesh Sista, MD (NYU Grossman School of Medicine, New York, NY), who wrote an accompanying editorial, said, “What the trial did well is demonstrate for a longer duration of thrombolytics—and this has been borne out by a prior study as well—there doesn’t seem to be any clear benefit to using ultrasound.”

But there are two features of SUNSET sPE that prevent it from being definitive, he indicated—the small sample size and the fact that use of alteplase wasn’t more tightly controlled. The latter issue makes it difficult to isolate any potential additive effects of ultrasound. “I think that will make it difficult to draw strong conclusions about ultrasound’s contribution,” Sista said.

He said a more-definitive trial would have three arms: systemic anticoagulation alone, ultrasound-assisted thrombolysis, and standard catheter-directed thrombolysis (CDT). Lytics would be delivered at the same dose and over the same amount of time in the thrombolysis arms.

Via email, Avgerinos pointed out that PE interventions—among which CDT is the most common—have been on the rise for the past several years, despite the fact that “we still lack high-quality comparative studies (particularly non-industry-sponsored) for the interventions we're offering to our patients and their added cost on our health systems.”

CDT has been increasingly adopted “as a decompensation prevention and potentially lifesaving procedure” for the treatment of submassive (intermediate-risk) and massive (high-risk) PE, the investigators note, with the idea being that more-targeted delivery of lytics at much lower doses and over a longer duration will lessen the bleeding risks seen with systemic treatment.

Preclinical studies suggested that ultrasound might be able to enhance the penetration of lytics and clearance of the clot during CDT. That led to the development of the EkoSonic Endovascular System (EKOS; Boston Scientific), which received US Food and Drug Administration approval based on the results of the ULTIMA trial. “The purported clinical benefit of the EKOS catheter is that similar thrombus clearance may be achieved using lower doses of lytic agents and/or shorter duration of therapy, thus potentially reducing complication rates and hospital stay,” Avgerinos et al write.

It remains unclear, however, whether ultrasound-assisted thrombolysis is better than standard CDT, a pertinent issue when considering the tenfold higher cost and the requirement for capital investment that comes with the EKOS catheter.

In SUNSET sPE, inspired by a similarly designed trial in patients with deep vein thrombosis (BERNUTIFUL), the investigators set out to compare the two approaches in a trial conducted at three US centers without industry funding. They randomized 81 patients with submassive PE (mean age 53 years; 53% men) to ultrasound-assisted thrombolysis with the EKOS catheter (6- or 12-cm infusion length) or standard CDT with Cragg-McNamara (Medtronic) or Uni-Fuse (AngioDynamics) multiple-side-hole catheters with 5- or 10-cm infusion lengths.

The lytic was alteplase (Activase: Genentech) in all patients, and dosing was left to the discretion of the treating physicians; the initial protocol recommended a maximum dose of 24 mg. After preliminary results of the OPTALYSE PE trial suggested that lower-dose, shorter-duration thrombolysis may be sufficient, the protocol was changed to recommend use of 4 to 8 mg of alteplase infused over 4 to 8 hours.

Ultimately, there were no differences between trial arms in terms of mean total alteplase dose (19 mg in the ultrasound group and 18 mg in the standard group; P = 0.53) or infusion time (14 hours in both groups).

[SUNSET sPE] should be an example to all of us to start being a little harder on ourselves and on industry to get quality data. Akhilesh Sista

The primary outcome was 48-hour clearance of pulmonary thrombus assessed by CT angiography using a refined Miller score. The score fell from 31 to 22 in the ultrasound arm and from 33 to 23 in the standard arm, with no difference in effect between groups (P = 0.76). CT obstruction index dropped by 21% and 22% in the two groups, respectively (P = 0.77).

Although a post hoc analysis suggested that thrombus reduction was greater in the ultrasound versus standard group among the subset of 20 patients who received 8 hours of lysis or less, the investigators say “this was likely an erroneous underpowered result, and it otherwise did not correspond to a similar RV/LV ratio response; but further studies may be needed.”

Improvement in the RV/LV diameter ratio was a secondary outcome, and the mean reduction through 48 hours in the overall trial population was greater in the standard group (0.59 vs 0.37; P = 0.01). “Although there is no apparent explanation for this observation, the study was not designed for this outcome, so it should be viewed with caution,” Avgerinos et al note. “The same applies for the longer hospital stay in the ultrasound-assisted thrombolysis group.”

In terms of safety, there were two major bleeds and three minor bleeds, all in the ultrasound arm. One patient who underwent ultrasound-assisted thrombolysis died in the hospital. “The patient had hypersensitivity pneumonitis and was diagnosed with bilateral PE, which was thought to be the source of her respiratory deterioration,” Avgerinos et al report. “Her pneumonitis persisted and she never clinically improved.”

SUNSET sPE adds to a body of literature on interventional PE treatments that’s in dire need of randomized data. Even for standard CDT, there is only the one RCT (ULTIMA), and that study included just 59 patients and used a surrogate endpoint of efficacy (RV/LV ratio). “So it’s very much on the level of a pilot study frankly,” Sista said.

Since the ULTIMA results were first reported back in March 2013, “there hasn’t been a single randomized trial comparing catheter-directed lysis to anticoagulants alone,” he continued. “So we’re really in a very data-poor zone. . . . And that’s of our own making. We haven’t pushed ourselves or our industrial partners to really ramp up the level of evidence to clarify what we should be doing.”

Asked why CDT—with or without ultrasound assistance—has been adopted in practice despite the dearth of evidence, Sista pointed to a variety of factors, including reimbursement, the organization of teams built to treat PE more aggressively, and the perception that mortality is very high in patients with submassive PE and that something must be done to clear the clot from the artery.

To the last point, Sista explained that initial registries demonstrating high mortality rates in submassive PE enrolled a mix of patients that included those with advanced cancer, heart failure, or pulmonary disease, which muddied the issue. If you take those very sick patients out of the equation, the likelihood of a stable patient with submassive PE dying is low, he said.

“I think that escalating therapy for [the highest-risk] patients is a very reasonable thing to do,” Sista stated. “But for the stable submassive PE patient, we have still not proven a benefit of reperfusion therapy either with systemic lytics or catheters.” The assumption that removing the blockage in the artery will improve patient outcomes “is what’s driving people to do this,” he added, “but we don’t have on the back end adequate clinical data to support it.”

What that means is that the level of use for some of these catheter-based therapies may be getting ahead of the data. “If we’re talking about based on evidence, [then] we’re doing it too often if you ask me,” Sista said.

Addressing that point, Avgerinos said that “catheter interventions as a whole (catheter thrombolysis and aspiration thrombectomy) are increasingly used to a level that may not be justified enough. We're looking forward to the [PE-TRACT] trial looking to evaluate the role of  intervention against anticoagulation alone.”

Sista indicated that there’s a larger message there for the medical community when it comes to evaluating new treatments for PE: “I’m very pleased that even though there are some flaws with SUNSET sPE, the investigators took it upon themselves to try to answer this question. It should be an example to all of us to start being a little harder on ourselves and on industry to get quality data. And ultimately, we’re going to stay in a state of limbo about CDT unless we really start pushing the envelope about what we’re supposed to be doing and not let other things that would influence our practice other than good solid data determine whether we do this or not.”