TCT 2019 Day One: TWILIGHT and Onyx ONE Kick Things Off

The morning focused on the best drug and stent combinations for reducing bleeding without increasing ischemic events.

SAN FRANCISCO, CA—Late-breaking clinical trials kicked off this morning in the Main Arena, with TWILIGHT leading the way. Roxana Mehran, MD (Icahn School of Medicine at Mount Sinai, New York, NY), presented this 7,119-patient trial, testing the hypothesis that ticagrelor monotherapy after 3 months would be superior to dual antiplatelet therapy (ticagrelor plus aspirin) among high-risk patients. 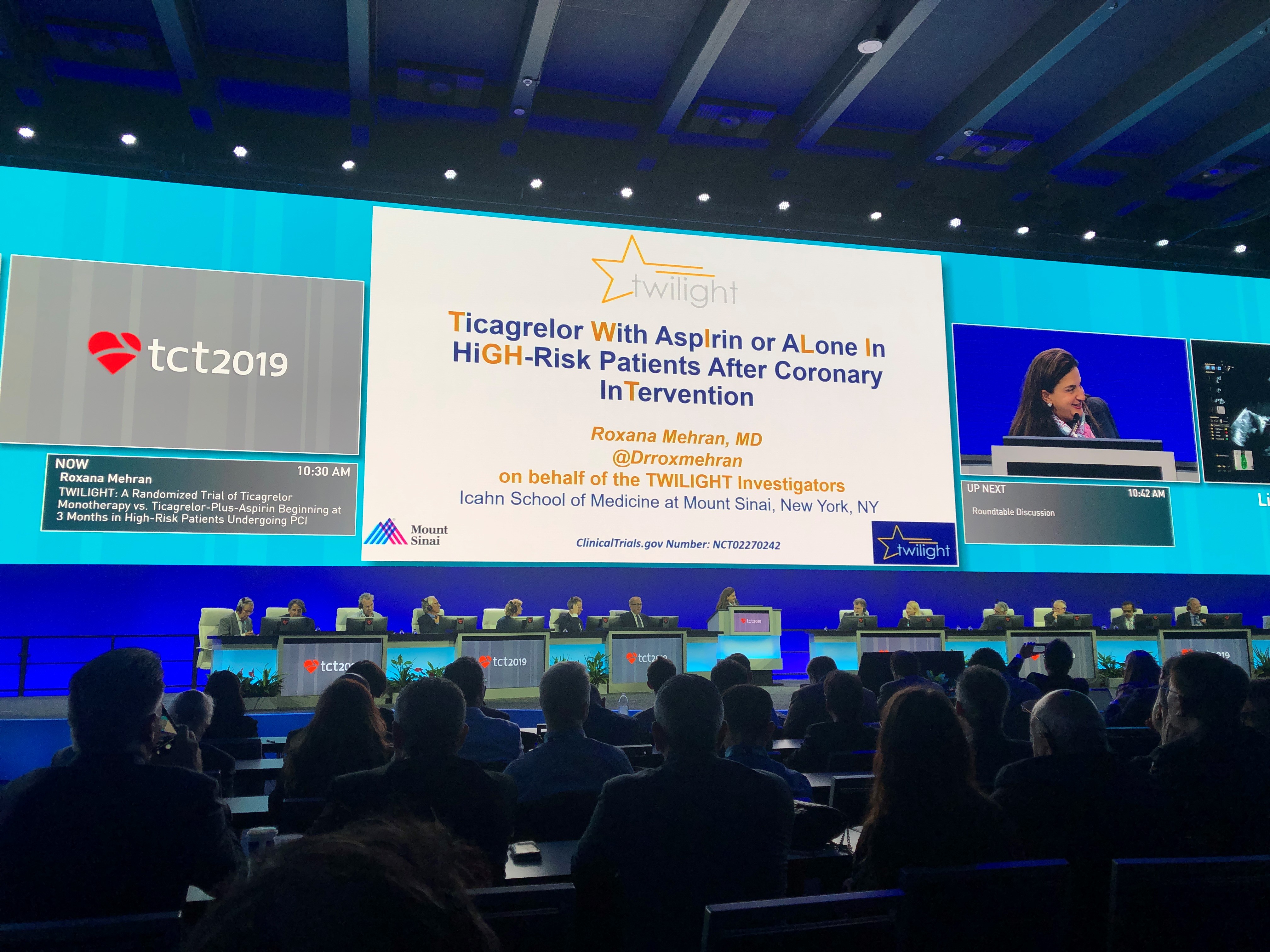 During a morning press conference, Robert Harrington, MD (Stanford University, CA), drew attention to the signal of increased stroke, which was numerically higher in the ticagrelor monotherapy arm. On this point, Mehran noted that this trial was not powered to look at stroke endpoints but said that they had been adjudicated by neurologists, and that patients with prior stroke had been excluded from this study. The finding is worth noting, she said, but may also have been the play of chance. By the same token, mortality and stent thrombosis were numerically lower in the ticagrelor-monotherapy arm.

Full details from TWILIGHT are already live on TCTMD. 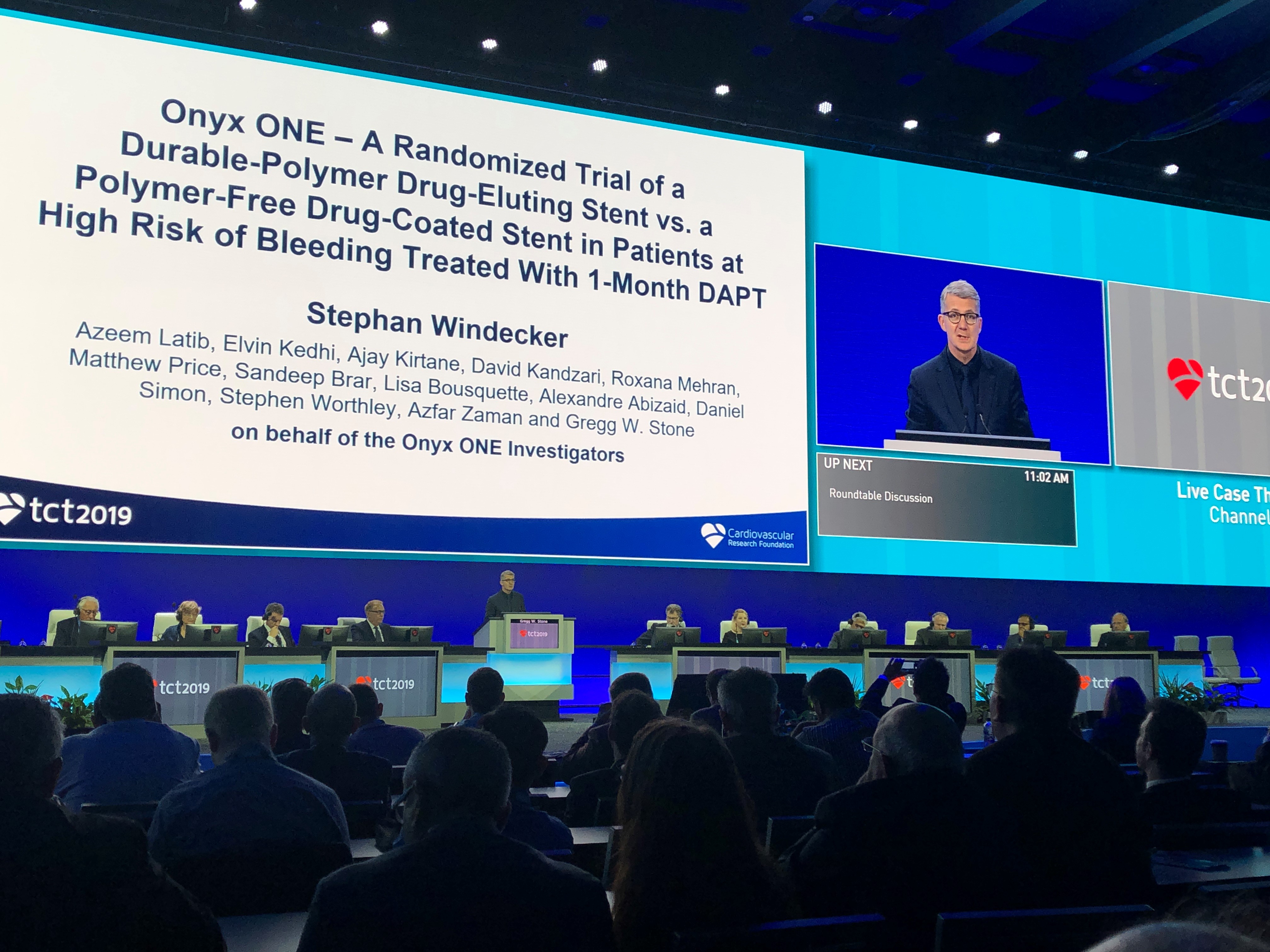 The trial enrolled 2,000 patients at high bleeding risk, following them for 1 year, at which point the combined rates of the primary endpoint of cardiac death, MI, or definite/probable stent thrombosis were not significantly different: 17.1% in the ZES group and 16.9% in the DCS group. Rates of the powered secondary endpoint of target lesion failure at 1 year were nearly identical between groups: 18.0% for ZES versus 17.9% for DCS. Bleeding rates were also similar.

Noting that this is the first trial to compare these two types of stents, Windecker said that these data confirm that the Onyx device is safe and effective in complex, high-bleeding risk patients in whom 1 month of DAPT is deemed the best strategy.

Onyx ONE trial finds no significant differences between Onyx and Biofreedom stents in HBR patients... is it a surprise? Seems to confirm the very small differences among multiple DES available #TCT2019 @shci_sec @secardiologia pic.twitter.com/C720xZLV43

Carrying on in this same vein (that is, looking for the best combination of antiplatelet and stent), the IDEAL-LM study turned its attention to left main disease treated with the thin-strut everolimus-eluting, bioabsorbable-polymer Synergy stent (Boston Scientific). 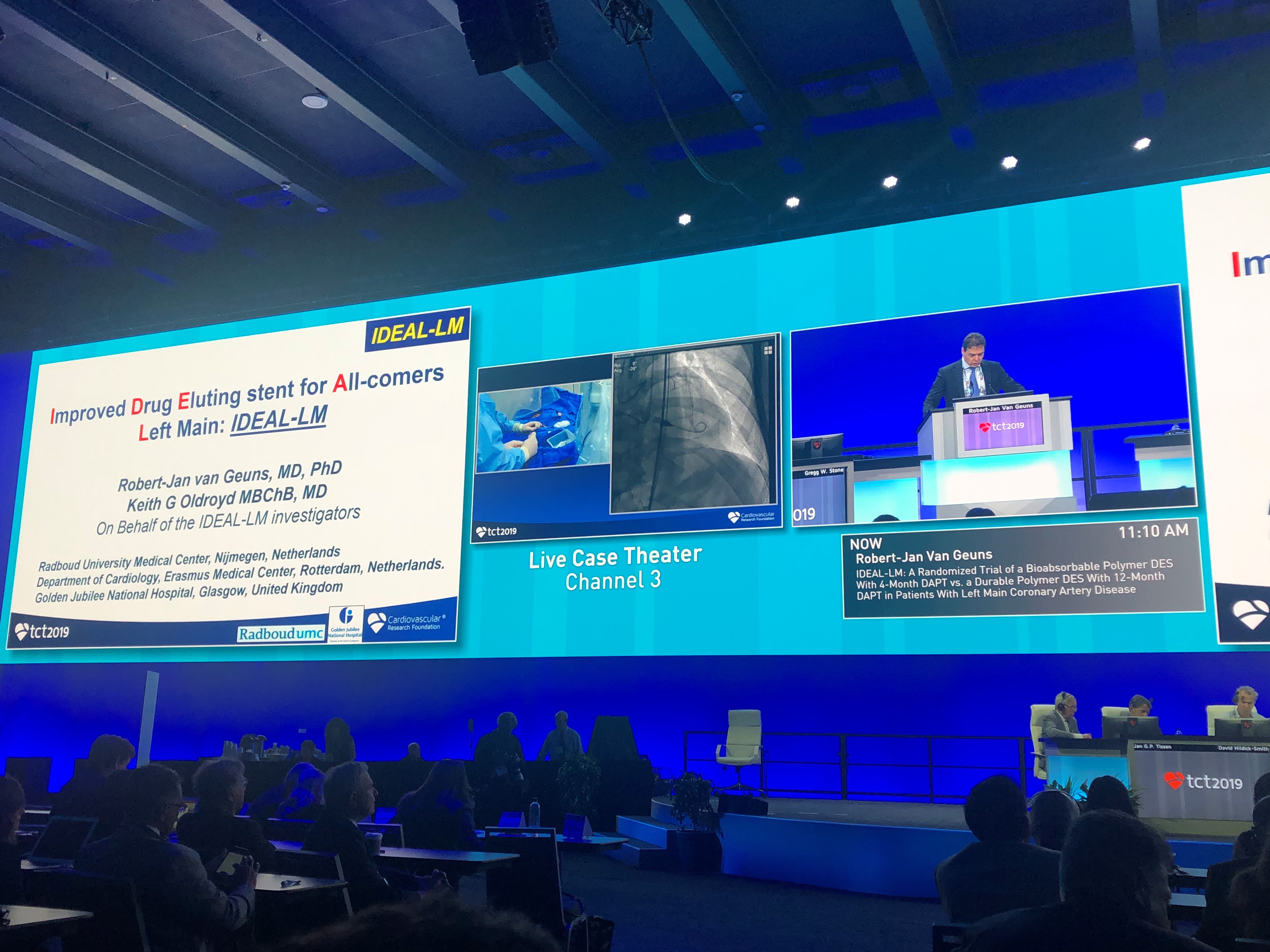 However, several experts expressed concern over the findings, particularly the trend toward higher ischemic events in secondary endpoints. For example, the risk of MI and probable/definite stent thrombosis were roughly double with Synergy and short-duration DAPT. Speaking in the morning press conference, several physicians said the new findings likely won’t sway their current practice, with many stating that when using the Synergy stent for patients with left main coronary artery disease they would still opt for 12 months of DAPT.

Be concerned: this is not something we should be moving to based on this study data #TCT2019

Very unconvincing study barely reaching an already very generous non-inferiority margin which is wider than standard . I will definitely not incorporate it in my practice. #TCT2019 pic.twitter.com/wuSP9akbsu

Get all the nuances for IDEAL-LM on TCTMD here.

The late-breaking clinical science presentations later this morning contain a mix of trials, again probing the best drug regimen for reducing ischemic events without increasing the risk of bleeding. The most recognizable name in this batch is AUGUSTUS, first released at the American College of Cardiology 2019 Scientific Session, looking at different antithrombotic strategies in A-fib patients who have ACS or who are undergoing elective PCI. New insights were unveiled today during a late-breaking presentation by Stephan Windecker, MD (Bern University Hospital), who zeroed in on key trial endpoints of bleeding and hospitalization across the different subgroups of patients. 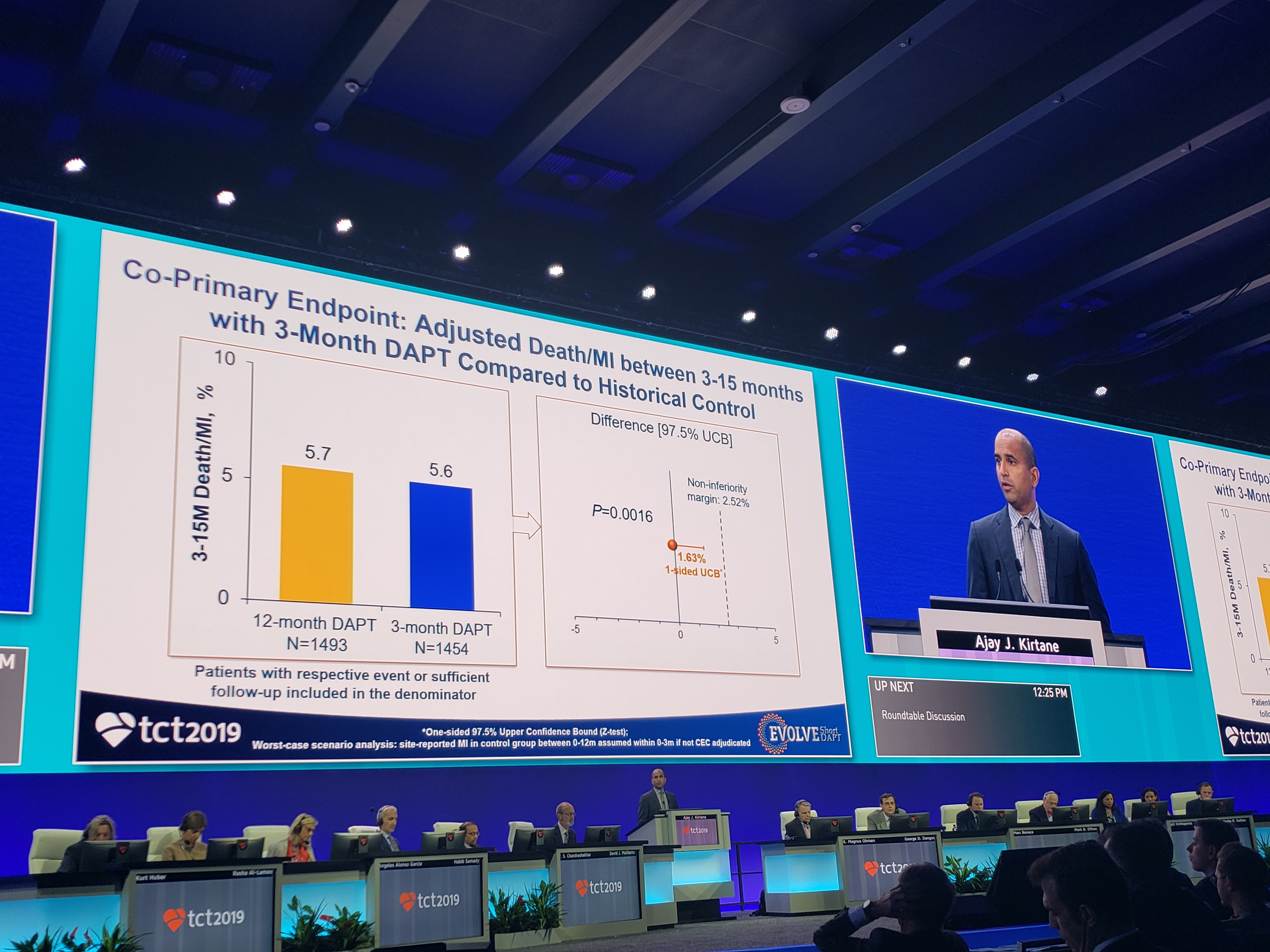 Speaking during a morning press conference today, Ajay Kirtane, MD (NewYork-Presbyterian/Columbia University Irving Medical Center, New York, NY), who presented the EVOLVE Short DAPT results, reminded the audience that the recommendation for 1 year of DAPT was a relatively arbitrary decision by the US Food and Drug Administration in response to the stent thrombosis scare of 2006. This interest in safely “de-escalating” DAPT is clear across many of the trials presented here today. For a US trial such as EVOLVE Short DAPT, however, the lack of devices approved for use with shorter dual antiplatelet duration complicates the ability to study this issue.

The single-arm EVOLVE Short DAPT trial found that elderly patients at high bleeding risk who receive Synergy everolimus-eluting stents (Boston Scientific) can, if needed, stop taking their P2Y12 inhibitor at 3 months then continue on aspirin alone for the next 12 months. In the study, patients free from stroke, MI, revascularization, and stent thrombosis after the 3-month DAPT regimen were eligible to discontinue their P2Y12 inhibitor.

“These data support the use of Synergy with a 3-month duration of DAPT in high-bleeding-risk patients,” he concluded.