Device-related thrombus mitigates the benefits of LAA closure relative to warfarin, but not relative to doing nothing at all, one expert says. 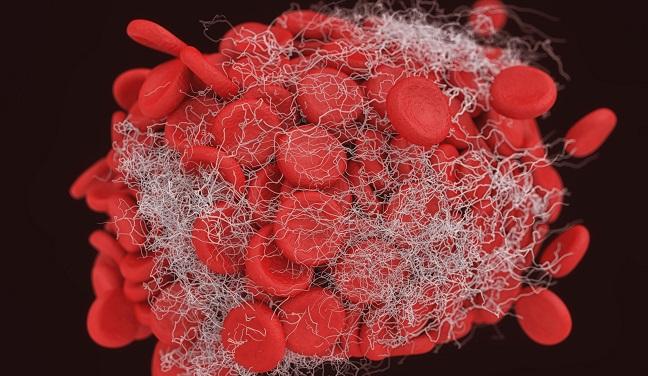 BOSTON, MA—Patients who develop thrombus on the Watchman left atrial appendage (LAA) closure device (Boston Scientific) carry a greater risk of stroke or systemic embolism, and there are hints of a causal relationship, a new analysis shows.

These patients had a more-than threefold increase in the risk of stroke or systemic embolism, as well as greater risks of major bleeding and hemorrhagic stroke. DRT was not associated with higher rates of cardiovascular or all-cause mortality.

“DRT is important,” Reddy told TCTMD, adding, however, that it’s necessary to keep the data in perspective. Most patients with DRT did not have a stroke/systemic embolism, and most strokes (about 90%) occurred in patients who did not have thrombus detected.

This issue doesn’t take away from the fact that LAA occlusion is still an alternative for patients with A-fib who can’t take oral anticoagulation over the long term, Reddy said. Rather, he said, “we see an area now where we can improve, and hopefully by better managing these patients, bring that stroke rate down a little bit further.”

Reddy said that Watchman investigators have been worried about the potential for thrombus formation from the beginning of the research program. A prior analysis from the PROTECT AF trial identified a DRT rate of 5.7%; the rate of stroke/systemic embolism/CV death was numerically but not significantly higher in these patients. 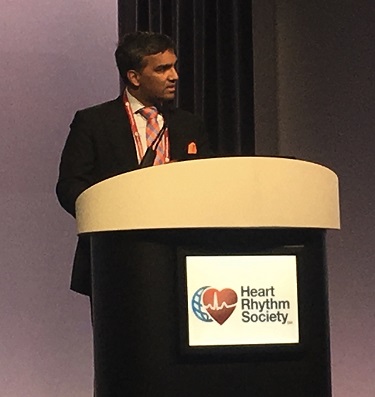 That analysis involved a relatively small group of patients and limited follow-up, though, and the investigators wanted to take another look at the issue. In the current study, published simultaneously online in Circulation, Reddy and colleagues looked at data on 1,739 patients who were successfully implanted with the Watchman device as part of four prior studies: the PROTECT AF and PREVAIL trials and the CAP and CAP2 registries.

During follow-up, transesophageal echocardiography (TEE) revealed 74 DRTs in 65 patients. Most (81%) were detected beyond 45 days, after postimplantation warfarin was discontinued.

To try to get at whether there was a causal relationship between DRT and stroke or whether patients who develop DRT simply have more risk factors for stroke in general, the investigators looked at the temporal relationship between the events in the 17 patients in whom both occurred. They found that the events occurred within 1 month of each other nearly half of the time (47.4%), which suggests, Reddy said, that DRT is causing some of the strokes.

To put the findings into context, Reddy pointed out that the ischemic stroke rate in the overall cohort was 1.77% per year. The expected stroke rate based on prior literature if no treatment were applied would be 6.0%, whereas treatment with oral anticoagulation would be expected to result in a rate of 1.71%.

An important question that remains, Reddy said, is whether it is necessary to perform a TEE at 6 months after implantation. In PROTECT AF and PREVAIL, TEEs were performed at 45 days, 6 months, and 1 year, whereas in the registries, a 6-month TEE was performed only if a problem was detected at 45 days. There was a nonsignificant trend toward more DRTs getting picked up in the trials, but there was no difference between the registries and the trials in terms of risk of stroke or systemic embolism, “suggesting that while a 6-month TEE might detect more DRT, the overall outcome in terms of ischemic stroke did not appear to be different,” Reddy said.

He laid out three potential options for TEE surveillance after Watchman implantation:

There are questions, too, about what to do once DRT is identified, Reddy said, noting that small studies suggest that most will resolve with anticoagulation. After that, “I think aggressive surveillance is important,” he said, because there is some evidence suggesting that DRTs can reappear in patients who are only taking aspirin after resolution of the thrombus. It’s also possible that these patients should be taking anticoagulation for a longer period of time after resolution of the DRT, but the utility of that isn’t clear, Reddy said.

How Does DRT Affect the Benefits of LAA Closure?

Serving as a discussant after Reddy’s presentation, David De Lurgio, MD (Emory University, Atlanta, GA), said, “DRT does continue to occur despite modifications of the device, despite increased training. It is something that is in the background and will be seen with the devices we know, including the Watchman device.

“What is a little alarming,” he continued, “is that the risk for DRT remains and extends well beyond the standard periods of anticoagulation, so there’s a big question about when are we out of the woods and is that something we can predict based on the patient profile or any other factors?”

…there’s a big question about when are we out of the woods and is that something we can predict based on the patient profile or any other factors? David De Lurgio

De Lurgio pointed out that the factors associated with DRT in the current study parallel traditional stroke risk factors, “so that is maybe an insight into something we can do for these patients.”

He also alluded to the lower risk of intracranial hemorrhage that has been observed with the non-vitamin K antagonist oral anticoagulants (NOACs) when compared with warfarin to suggest another potential approach to improving outcomes in patients with DRT, who had higher risks of both ischemic and hemorrhagic stroke.

“The thought that there is an increased hemorrhagic stroke [risk], probably due to reinstitution of anticoagulation, does beg the question of whether there’s something we can do with different anticoagulants that are known to be associated with a lower intracranial hemorrhage should we see DRT,” De Lurgio said.

Reddy concluded his presentation by calling for “strategies and device modifications to minimize DRT.” He noted to TCTMD that the next-generation Watchman FLX device—for which clinical trials started just this week—has a smaller metal hub that will hopefully reduce thrombus formation. That device, which had been available as part of a limited market rollout in Europe, was pulled from shelves in April 2016 due to device embolization concerns.

NOACs Perform Worse Than Warfarin in Real-World Study, Especially When Adherence Is Low

TAVR Readmissions Similar to Surgery’s at 30 Days, but Costs Are Higher

EWOLUTION Confirms Safety, Efficacy for Real-World Use of Watchman, Even With No Postprocedural Drug Therapy